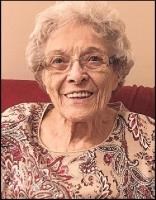 Paula Frances White, 89, of Issaquah, WA, died peacefully in her sleep Friday, Oct. 29. She was born in Spokane, WA, Feb. 12, 1932.
Paula was the only child of Paul and Frances Matson. She attended K-12 in Spokane. After graduating, she attended Washington State University, joined the Pi Phi sorority, and graduated with a BS in nursing. She met the love of her life, Joseph C. White, Jr. at WSU and they were married Sept. 1, 1954. She worked as an RN in Spokane until 1956. She and Joe moved to Vancouver, WA, where they raised their family.
Paula enjoyed playing bridge, volunteering for the Republican party, the Seattle Orthopedic guild as treasurer, cheering on the Cougars, and raising her family. In 1979 she became co-owner of Halls Pharmacy with Joe, in Hazel Dell. She had natural business acumen. In 1990 they retired to Manchester, WA. She moved to Issaquah, WA, in 1996, where she lived for 25 years.
Survivors include three daughters, Diane Lentz of Sammamish, Julie Zimmerman of Wenatchee, and Nancy Omiliak of Bellevue; nine loving grandchildren, one great-granddaughter, three nieces and one nephew. She was preceded in death by her husband, Joseph C. White Aug. 6, 1993.
A private burial will be at Sunset Lane Cemetery in Port Orchard. A family celebration of life will be held in Issaquah.
In lieu of flowers, memorials may be made to Seattle Children’s Hospital, 4800 Sand Point Way, Seattle, WA 98105. Visit www.Rill.com for more detailed history.
Please share a memory @ www.columbian.com/obits

Published by The Columbian on Nov. 7, 2021.
To plant trees in memory, please visit the Sympathy Store.
MEMORIAL EVENTS
To offer your sympathy during this difficult time, you can now have memorial trees planted in a National Forest in memory of your loved one.
MAKE A DONATION
MEMORIES & CONDOLENCES
0 Entries
Be the first to post a memory or condolences.