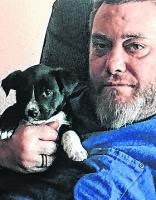 Shane passed away Sat., Oct. 14, 2017 at Longview, WA hospital, surrounded by his family. He was born April 27, 1971 to Kareen and Jerry Stout in Tulsa, OK. When Shane was a young child, he moved to Washington where he graduated from Prairie High School.
Several years later, Shane met Pam Sholl (his bride) and they married in 2000.
Shane worked for Diamler for 15 years. He loved camping, canoeing, and anything outdoors. He especially liked going to Trout Camp that his buddies started several years ago.
Shane left this world too soon. He was loved
by so many and will be greatly missed.
Shane is survived by his wife, Pam; 2 daughters; his mother, Kareen; 2 sisters; as well as numerous extended family and friends.
A Celebration of Life will be at a later date.
Please sign his guest book at: www.columbian.com/obits.

Published by The Columbian on Nov. 5, 2017.
To plant trees in memory, please visit the Sympathy Store.
MEMORIAL EVENTS
To offer your sympathy during this difficult time, you can now have memorial trees planted in a National Forest in memory of your loved one.
MAKE A DONATION
MEMORIES & CONDOLENCES
11 Entries
I love and miss you so much! R.I.P
Victoria Childers
Daughter
September 28, 2018
I have great memories of Shane from high school! Always laughing, smiling and being sarcastic in a friendly way! May you rip Shane. ❤
Deanna Olson Heller
November 6, 2017
May you rest in peace my friend and may you show your presence to comfort those who loved you most!! We will see eachother again someday my friend!
Cynthia Martin
November 6, 2017
Shane, You will be missed, but never forgotten because you will live in our memories forever. You and Pam are more than friends, you were and are family and will be loved forever. Judy and Harold Foell
November 5, 2017
We will always miss you, but you will live in our memories forever. You were family as is Pam. We were blessed to have you in our life and you added so much. Judy and Harold Foell
November 5, 2017
You will be missed Shane, RIP.
Michael Medvec, Sr.
November 5, 2017
For a small man you had a giant presence and a heart to match it! Thank you for loving my friend so well. I will forever miss your fast wit and your tender heart. We are all better having known you. My prayer is that you are in heaven canoeing with your dad, no pain only joy. Love ya, Tammy
Tammy Reck
November 5, 2017
My wonderful,funny nephew. I love and miss you greatly. I am so happy that your pain is no more but our world is a little less bright without you in it. Rest until we meet again. I love you. Pam I love you so much and hope you can find some peace!
November 5, 2017
Shane you will be missed so much. Ur smile and ur sarcastic ways will live on in our hearts and memories. Love you buddy. ❤
Andrea Beslanowitch
November 5, 2017
Miss you sooo much.

Love Your Favorite kid
Jessica Cummings
November 5, 2017
My precious son there are no words. A great light has gone out of my life. But what memories I have. We laughed so hard together, cried so hard together and loved each other as only a mother and son can. I live for the day I can once again give you a hug. My greatest prayer of all your life has been answered..you are no longer in pain. I will love you forever baby boy.
Kareen Grogan
November 4, 2017
Showing 1 - 11 of 11 results