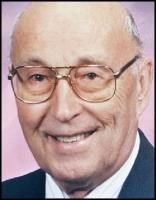 Frank was born May 25, 1923 in Mount Vernon, WA, to Frank and Thrina Van Valkenburg. He passed away in Vancouver, WA, at age 98.
Frank attended school in Mount Vernon, graduating from high school in 1941. He then attended Mt. Vernon Junior College and Washington State College.
He was drafted into the Army in 1943 and served for 34 months during World War II. He won a battlefield commission along with other awards.
Upon his return home after WWII, he joined his father and brother in The Piston Service Co., an auto parts and machine shop business. In 1955, the two brothers purchased the business and operated it together until they retired and sold the business in 1986.
In 1947, Frank was united in marriage to Eunice Carlson, enjoying 70 years of marriage.
Frank was active in community affairs during his working years, serving on the Board of Directors of the YMCA, American Red Cross, The United Good Neighbors, Camp Fire Girls, and the Chamber of Commerce. He was active in his church, First United Methodist Church, serving in a number of offices including lay leader and treasurer.
After living in Mt. Vernon for 65 years, Frank and Eunice moved to Vancouver, WA, to be closer to children and grandchildren. While living at Fairway Village in Vancouver, Frank was involved in many of the activities, including being president of the men’s golf club and serving a term on the board of directors. He enjoyed playing golf and volunteering as a course marshal.
He was an active member of the First Covenant Church of Portland where he volunteered his services for many years doing maintenance and repair work.
Frank and Eunice traveled around the country attending annual reunions of the 104th Infantry Division and valued their friendships with other WWII veterans and their families. The couple traveled to Europe and visited places Frank saw combat in Germany and Holland.
Frank was preceded in death by his wife, Eunice; and siblings, Robert and Janet. He is survived by his four children, Candyce Sylling (Charlie), Cheri Jones (Rick), Carole Cink (David), and son, Craig (Shelley); grandchildren, Emily, Andrew, Courtney, Scott, Carson, Trina, Rebecca, Rachel, Riley; great-grandchildren, Sasha, Caroline, Samantha, Padraic, Charlotte, and Jasper.
A private service with military honors will be held at Willamette National Cemetery.
Memorial donations may be made to your local Veteran’s Association, continuing Frank’s support of helping and honoring our Veterans.
Please share a memory @ www.columbian.com/obits

Published by The Columbian on Jan. 9, 2022.
To plant trees in memory, please visit the Sympathy Store.
MEMORIAL EVENTS
To offer your sympathy during this difficult time, you can now have memorial trees planted in a National Forest in memory of your loved one.
MAKE A DONATION
MEMORIES & CONDOLENCES
1 Entry
I will turn home at last once more Knowing that a true soldier's rest Once earned is sweet His peace complete Who gave until the last his best
National Timberwolf Pups Association
Other
January 9, 2022
Showing 1 - 1 of 1 results