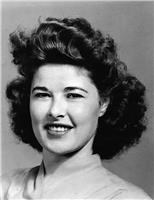 Wilma R. Dawson went home to be with the Lord on September 18, 2017. She was born April 10, 1918 on a farm in Chismville, Arkansas to Jacob and Alice Sutton. As a girl, Wilma attended her local church, the Walnut Grove Cumberland Presbyterian Church, in Magazine, Arkansas. (Once when she was young, she was accidentally left behind at the church after a crowded revival meeting).Â
As a young woman during World War II, Wilma worked for several employers. At one point, she supported the war effort by helping to build airplanes at the Douglas Aircraft Company Plant, near Oklahoma City. After the war, Wilma moved back to Arkansas and met Kennith L. Dawson, who had served in the U.S. Army. They were married in Van Buren, Arkansas on December 20, 1947. Kennith and Wilma in 1950 moved to Vancouver, Washington where they would join Trinity Baptist Church and eventually raise five children.
Although she never completed high school, Wilma was an avid reader whose goal was to see all of her children graduate from college-which they did. In Vancouver, she worked in the fall at the California Packing Corporation (the Del Monte Cannery) for over twenty years to help pay for their education.
Wilma loved the Lord. She was a member of Trinity Baptist Church for 65 years. For many of those years, she volunteered to help provide child care in the church nursery. She was loving and dedicated to her husband, Kennith (who preceded her in death in 2007), as well as to her children: Gail, David, Stephen, Mark and Kimberly. She took delight in her 14 grandchildren (two of whom preceded her in death) and her 10 great grandchildren.
Wilma was known for her generous and helpful nature. Even when she couldn't go to church, she continued to serve the Lord by sending cards and making phone calls of encouragement. She made friends wherever she went.
Wilma enjoyed genealogy, her pets, road trips, painting, and planting beautiful flowers. Even at age 99, she enjoyed reading mystery books and doing word searches. Her family will miss her unconditional love and fun loving nature, but we are comforted in knowing that we will be reunited with her in Heaven.
The service will be Wednesday, September 27, 2017 at 11:00 a.m. at Trinity Baptist Church, 6700 MacArthur Boulevard, Vancouver, Washington.
A private burial at Park Hill Cemetery will precede the service at the church.
Please sign Wilma's Guest Book at www.columbian.com/obits.

To plant trees in memory, please visit our Sympathy Store.
Published by The Columbian on Sep. 24, 2017.
MEMORIAL EVENTS
No memorial events are currently scheduled.
To offer your sympathy during this difficult time, you can now have memorial trees planted in a National Forest in memory of your loved one.
MAKE A DONATION
MEMORIES & CONDOLENCES
2 Entries
Our thoughts and prayers are with you all at this time. She never forgot my birthday. We kept in touch although we were many miles away.
With love and sympathy,
Regina Posey-Haaser
Regina Haaser
Family
September 27, 2017
MY SWEET EVER LOVING AND BRILLIANT AUNT SHARP EVEN UNTIL PASSING THIS LIFE, STILL GIVING GOOD ADVISE AT THE 99 YEAR AGE MISSING HER GREATLY
DON LEE
Significant_other
September 24, 2017
Showing 1 - 2 of 2 results