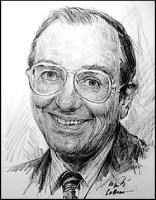 Tom Stitzel died when his heart unexpectedly gave out while at home in Boise, ID. Tom was the kind of person who packed more into a day than most do in a week. According to his Day-Timer (which he carried with him everywhere), he was going to spend Sept. 9 making cider from the apples he grew in his orchard and harvest his garden veggies. Then, he would spend the next several weeks delivering his bounty to friends and neighbors (whether they wanted squash or not).
Tom was born in Walla Walla, WA, to Walter and Ellen Stitzel. He graduated from Battle Ground (WA) High School in 1953 and married his high school sweetheart, Bonnie Steward 66 years ago. He always said Bonnie was the prettiest girl he ever knew and felt blessed to spend his life with her. Together they had six children.
After graduating from Washington State University with a Chemical Engineering degree, Tom worked for Phillips Petroleum in Bartlesville, OK, then returned to school for a Ph.D. in Finance from the University of Oregon.
Tom taught Finance at Oregon State University. In the mid-70s, he took his family on sabbatical to New Zealand for a year. There, he taught finance at Lincoln College in Christchurch and consulted for energy companies. Bonnie and Tom made many dear friends, and have returned at least a dozen times, including for their 50th wedding anniversary with 19 children, grandchildren, and spouses.
In 1975, the family moved to Boise. Tom was a finance professor for two years and then became Dean of the School of Business and Economics (COBE) at Boise State University. As Dean, he led COBE through national accreditation. He was COBE’s longest-serving dean from 1977-1991 and continued to teach until retirement in 1999.
He authored and co-authored study guides and four finance textbooks. As an expert on finance, Tom lent his guidance, advice, and oversight to many businesses, educational institutions, and government agencies. He was a member of the New York Stock Exchange Individual Investor Advisory Committee, served on the U.S. Securities and Exchange Commission, president of the Western Association of Collegiate Schools of Business, and director of the Western Finance Association. Tom was also on the board of Treasure Valley Surgical Hospital, Liberty Mutual Insurance Company, Stein Roe Investment Funds, and many others.
Tom served in several executive positions for the United Way of Ada County, director of the Boise chapter of the American Red Cross, director of the Idaho Council for Economic Education, and for four decades he was a member of the Boise downtown chapter of the Rotary Club. He also served as president of the Boise River Trail Foundation to expand the Greenbelt and as it fit with his mission to leave a place better than he found it.
For 25 years, Tom was a volunteer reading coach and “grandpa” to the third graders at Whitney Elementary School. He would often show up in hats collected from his travels to promote curiosity in worldwide geography. Inspired by the dedication of elementary teachers he and Bonnie created a scholarship fund for them through the Idaho Community Foundation.
Tom was a member of the Cathedral of the Rockies and played clarinet in Treasure Valley Concert Band. He enjoyed tennis, bridge and gardened right up until his death.
Tom loved to travel and felt that these experiences were as important as classroom education. He circled the globe several times for excursions over six of seven continents. Some people collect things, but Tom collected friends.
Tom is survived by wife, Bonnie; six children, Nancy Musselman (Gary), Matthew, Jeff (Sharon), Peter (Maria), Lisa, and Jennifer McCollum (Kevin); 11 grandchildren, Paul (Amie) and Matt (Delaney), Helena and Arthur Nolan, Ariana, Olivia, Camille and Benjamin, Sean, Oliver and Leila, and four great-grandchildren, Finley, Avery, Addilynn, and Allison.
Burial will take place in a private ceremony with family. There will be a Celebration of Life party in the future (details will be available www.relyeafuneralchapel.com/tributes/Thomas-Stitzel).
Please consider a donation to Boise State University Thomas E. Stitzel Endowment (BS068) or Idaho Community Foundation, Stitzel Advised Fund for Elementary Teacher Support.
Please share a memory @ www.columbian.com/obits

Published by The Columbian on Sep. 21, 2021.
To plant trees in memory, please visit the Sympathy Store.
MEMORIAL EVENTS
To offer your sympathy during this difficult time, you can now have memorial trees planted in a National Forest in memory of your loved one.
Funeral services provided by:
Relyea Funeral Chapel
MAKE A DONATION
MEMORIES & CONDOLENCES
1 Entry
The drawing and the first paragraph characterize Tom and the joy in which he lived life so well. Tom and my Mom were friends since they were 5, he was like a brother to her. She is the keeper of many growing up in Battle Ground memories of Tom; the best story I remember her telling is Tom riding a tricycle through his teacher's office. I don't remember a time where I didn't know Tom. It is the smaller memories that stand out, from berry picking outings to his TOMato pants to his not being able to successfully act out "Kramer vs. Kramer" in charades. We are so grateful have seen him this summer. He is very much missed.
Gretchen Potter
Friend
September 21, 2021
Showing 1 - 1 of 1 results