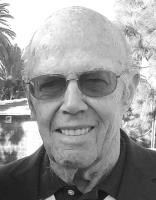 FUNERAL HOME
McLeod Mortuary
1919 East Valley Pkwy
Escondido, CA
THOMAS F. NOLAN
May 10, 1928 ~ December 14, 2015
"Tom will be remembered for his humor,
strength of character, compassion for others,
and his great love of family and faith."

Thomas F. Nolan, 87, left us Mon., Dec. 14, 2015 at the Silverado Escondido Memory Care Community in California. He was born and raised in Long Island, NY.
Tom found the love of this life, Diane, in Fort Lauderdale, FL. The two of them landed in the Pacific NW thanks to his military post. Despite many moves, they chose to stay and raise their family here in Vancouver, WA and are proud to have been residents at the historic Vancouver Barracks/Officers Row. After 30 years of service with great distinction, SGM Thomas F. Nolan retired and forged ahead as a civilian.
Tom is survived by his son, Timothy and Mary Nolan of Fremont, CA; three daughters, Maureen Nolan-Mastrud of Vancouver, WA, Eileen Nolan of San Francisco, CA, and Kate and Andrew Holmes of Huntington Beach, CA; daughters-in-law, Erin Nolan of LaCenter, WA and Nancy Nolan-Ray of Washougal, WA; along with his thirteen grandchildren.
He was preceded in death by his wife, Diane (2005); and two sons, Michael J. Nolan of LaCenter, WA (2010) and Patrick J. Nolan of Vancouver, WA (1990).
SGM will be laid to rest in the Arlington National Cemetery in Arlington County, VA.
Memorial donations may be sent to the Wounded Warrior Project at www.woundedwarriorproject.org.
Please sign his guest book at: www.columbian.com/obits.
Published by The Columbian on Dec. 22, 2015.
To plant trees in memory, please visit the Sympathy Store.
MEMORIAL EVENTS
To offer your sympathy during this difficult time, you can now have memorial trees planted in a National Forest in memory of your loved one.
Funeral services provided by:
McLeod Mortuary
MAKE A DONATION
MEMORIES & CONDOLENCES
2 Entries
Tom was a good friend and a Magnificent human being,Soldier and family man. He was a great mentor to me on how to be a leader,soldier and family man. He was always willing to help and guide with a sense of humor. He will always be remembered. Tom may the everlasting love of Christ be with you.

MSG USA Retired, Michael Bermejo
December 24, 2015
I will always remember Tom. When I arrived in Vancouver, he, along with a good friend of mine assisted me in purchasing my first home. He was a very professional and friendly person. He was a stellar soldier, and was dedicated to protecting the freedom of this country. He will be missed by many. God rest his soul.
Bill Ramonas
December 24, 2015
Showing 1 - 2 of 2 results