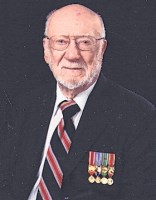 Thomas John Donovan, a retired humanities educator, died Tuesday, October 10, 2017, in his native Vancouver, WA. He was born on December 14, 1917, to Joseph John Donovan and Louise Padden. Tom is a descendant of the Padden Family who helped establish St. James Catholic Church in Vancouver. His maternal grandparents, Thomas W. Padden and Sarah Catherine O'Byrne, were married at St. James in 1873, his own parents were married there in 1906, and his daughter Marcella in 1984.
After graduating from St. Edward's College in Seattle, Tom served in the Army with the 13th Armored Division, deploying to the Rhineland and Central Europe. He "was assigned to division trains as a medical soldier, running the dispensary, in Trier - or Augusta Trevorum, as the Romans called it, or Treves, as the French said, "he told the University of Portland Magazine in 2002. "From there we moved down along the Rhine-Danube frontier of the Roman Empire, ending up in Central Europe, where once the Romans had stationed their own 13th Legion."
After his military service, Tom attended the University of Southern California, graduating with a Master's degree in Philosophy. He continued his philosophy studies at the University of Chicago as a University Fellow from 1950 to 1952, where Tom met and married fellow student Helen Frances Murphy in 1953. Shortly after their son Joseph was born, Tom returned to Vancouver with his new family, where they took up residence at the home his father built in 1932 on West 29th Street.
Tom shared his love of Latin and all things classical throughout a 49-year teaching career. He taught Latin and social studies at Providence Academy High School in Vancouver, WA, from 1957 to 1960. After two years with the Washington State Child Welfare Service, he returned to the classroom, teaching - Latin, English, and social studies at Hudson's Bay High School from 1962 until 1983. Then, from 1983 to 1991, Tom taught in the Vancouver School District's special services program. In 1991, Tom joined the faculty of the Department of Philosophy at the University of Portland, Portland, OR, where he taught Greek and Latin until his retirement in 2006 at the age of 88.
Tom is survived by his children, Joseph Donovan, Teresa Cotter, Marcella Hadeed, and Elizabeth Donovan; his sons-in-law, Michael Hadeed and Daniel Cotter; and his grandchildren, John Hadeed, Michael and Kim Hadeed, Teresa Hadeed, Joan Hadeed, Catherine Hadeed, and Thomas Hadeed.
Tuesday, Oct. 17, 2017: Viewing will be held at Hamilton Mylan Funeral Home from 9:30 a.m. to 10:30 a.m. ~ Rosary at St. James at 11:35 a.m. ~ Funeral Mass at St. James at 12:10 p.m. ~ Burial immediately following at Mother Joseph Catholic Cemetery.
Please sign his guest book at: www.columbian.com/obits.

To plant trees in memory, please visit our Sympathy Store.
Published by The Columbian on Oct. 15, 2017.
MEMORIAL EVENTS
No memorial events are currently scheduled.
To offer your sympathy during this difficult time, you can now have memorial trees planted in a National Forest in memory of your loved one.
Funeral services provided by:
Hamilton-Mylan Funeral Home, Inc. - Vancouver
MAKE A DONATION
MEMORIES & CONDOLENCES
9 Entries
Dearest Liz, Marcella, and families...
I am so sorry to hear of your father's passing. He was such a kind man. I have fond memories of him from when I was a little girl. Visiting your home on 29th St, and then I had the good fortune to have him as a wonderfully inspiring English teacher in high school at Hudson's Bay. He was always kind, professional, and dignified...with an amazing dramatic reading voice! I used to love listening to him read aloud in class. It felt like I was listening to a world-class actor. Very soothing and comforting. My heartfelt condolences to you all. Know that he's watching over you still. May his good memories give you peace. Sincerely, Mardi Jorgensen Bone
Mardi Jorgensen Bone
October 25, 2017
Liz,

So sorry to hear about your Dad's passing. I loved reading about his life and know he will be missed. I'm thinking about you and your family.

Gina (Deli)
October 24, 2017
Dear Liz and family of Mr. Donovan, I'm saddened to learn of Mr. Donovan's passing. You all are in my prayers.
William Gustafson
October 23, 2017
Tom's love of world history spread exuberantly to his own family history. With pride and meticulous notation, he has left a record that will inform future generations of the interesting and hard-working men and women who preceded them - from Roscommon, Ireland, on horse-back across the Isthmus of Panama, to the Gold Rush in California, and eventually to the frontier town of Vancouver, Washington. His work is a loving gift to his grandchildren and beyond.
Patricia Duecy
October 19, 2017
I was fortunate enough to have Mr. Donavon for Pre-College Writing during my last semester in 1976. I only wish I could have had more opportunities to be in his classes. He made a lasting impression on me.
Gary Wakeman
October 16, 2017
Angel Blessings Mr.Donovan. Best English instructor I had at Hudson's Bay (class of 73). Loved Modern Novel class. Rest in Peace.
Patricia Robertson
October 16, 2017
Rest in peace.
October 15, 2017
Tom was a gentleman and a scholar--a Catholic gentleman in the mold of Evelyn Waugh's Gervase Crouchback. Though I had not seen him in several years, I remember with great pleasure the few times we spent together. He was witty and kind, two qualities that do not always go together, but did in him.

Georgia and I send our condolences to Elizabeth and all the family.

May his soul and the souls of all the faithful departed, through the Mercy of God, Rest in Peace.
Bob Harper
October 15, 2017
May you Rest In Peace, Mr. Donovan. I admired you and your wonderful family. Please look down upon those who loved you and help them with your new powers! Love ❤ and Memory Eternal! Mary Hadeed-Zaboli.
Mary Hadeed-Zaboli
October 15, 2017
Showing 1 - 9 of 9 results