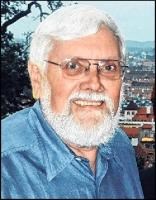 Ted R. Olsen died Dec. 23, 2021, after an eight-year battle with idiopathic pulmonary fibrosis. He was born Oct. 12, 1939, to Oswald and Elsie (Shephard) Olsen in Portland, OR, joined two years later by brother Roy (deceased, 2001).
Ted retired as a copy editor from The Columbian after 29 years. He was a passionate golfer (five holes in one) from age 12 until several years ago when his IPF wouldn’t allow it. Ted was an avid reader, lifelong international traveler, tent camper, rabid sports fan (particularly the Ducks), and cribbage player. After graduating from University of Oregon in 1964, he taught English and journalism at Roseburg Senior High School where he met Nancy. They married in 1966 and spent the next three years teaching English as a Second Language at Hatay Ataturk Koleji in Iskenderun, Turkey.
Ted is survived by his beloved wife Nancy, of 55 years; children, David (Lura), Meg Rodriguez (Chon), foster daughter, Rhonna Lee; grandchildren, Megan Lee, Daniel Rodriguez, Isaac Rodriguez, Kate Olsen; sister-in-law, Margaret Lead (more a real sister and constant traveling companion); and surrogate daughter/niece, Karen Olsen. He and Nancy were foster parents to 36 children plus hosted an exchange student from Japan. Ted is also survived by Mike and Claudia Gray, lifelong friends and great supporters in his battle with IPF.
The family will have a private service because of COVID.
Please share a memory @ www.columbian.com/obits

Published by The Columbian on Jan. 2, 2022.
To plant trees in memory, please visit the Sympathy Store.
MEMORIAL EVENTS
To offer your sympathy during this difficult time, you can now have memorial trees planted in a National Forest in memory of your loved one.
MAKE A DONATION
MEMORIES & CONDOLENCES
2 Entries
Heartfelt condolences to Nancy, Meg, Chon, David, Lura and all their families at this sad time. I'm thinking of you all with love. I recall spending quite a bit of time at Ted and Nancy's home with Meg when we were in college. At that time, I recall being amazed at the many lives they've touched through being both parents and foster parents, the travel adventures they've had over the years, and being especially captivated by their stories of life in Turkey. Ted's wit, sense of humour, gentle nature, and ability to sit and listen to some of the silly things that teens go on about made me gravitate to him. He was a very special man who lived life well. He will be deeply missed.
Michelle Henderson
January 4, 2022
With deepest sympathy. Sorry to about Ted's passing. Ted and my dad, Bob Beck, worked together for many years and had lots of great stories. Sending hugs.
Wendy Beck
Other
January 3, 2022
Showing 1 - 2 of 2 results