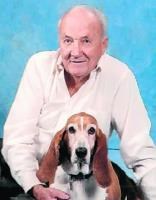 TSgt Stott Edward Royle, passed away on April 4, 2016 at his home in Fairfield, California. Stott was born February 10, 1935 in Vancouver, Washington to Stott-Goodier and Dorothy Royle. Stott graduated from Vancouver High School in 1953 and attended Clark College.
Stott served his country in the US Marines for 4 years and the US Air Force for 23 years. His duties included Marine Drill Sargent and Air Force Security Forces Confinement and Correctional Custody Officer. Stott was assigned to multiple military bases stateside and overseas. He served in Korea, Japan, Okinawa and two tours in Vietnam. Stott was awarded the Bronze Star for his service in Vietnam.
Following his retirement from military service, Stott continued his service to his community as a block captain for the neighborhood watch program. While patrolling the neighborhood, Stott was always accompanied by his beloved hounds; first Duchess, and later, Molly. Stott also worked for the State of California, as a Bridge Monitor, servicing the delta area, Ace Hardware in Suisun City and Steve Hopkins Honda of Fairfield.
Stott had a passion for fishing, gardening and watching old westerns. Stott was also an avid Jeff Gordon fan and enjoyed dancing, cruising and sailing with family and friends.
Following the passing of his wife, Grace, Stott met, fell in love with and married Judy. Judy was by his side when Stott was called home to be with his heavenly father.
Stott is survived by his wife Judy; sons Scott Royle, Steven Royle and Tim Nishmama; daughter Karen (Pat) McNenny; sister Tonita (Toni) Donnelley; brothers Frank Burns and Gary (Suzie) Burns; sister-in-law Judy Burns; nephews Mark and Jeff Donnelley; grandsons Justin and Nick Wright; brother-in-law Jack (Pat) Tsuji; sister-in-law Teri Mortimer, as well as numerous cousins, nieces and nephews. Stott was preceded in death by his parents, wife Grace Royle, brother Jack Burns and sister-in-law Beth Burns.
Committal services with Full Military Honors will be on Monday, May 2, 2016 at 1:00 p.m., held at Sacramento Valley National Cemetery, 5810 Midway Rd., Dixon, CA 95620.
Funeral arrangements are under the care of Bryan-Braker Funeral Home, (707) 425-4697, www.bryanbraker.com
Please sign his guestbook at www.columbian.com/obits.
Published by The Columbian on May 1, 2016.
To plant trees in memory, please visit the Sympathy Store.
MEMORIAL EVENTS
To offer your sympathy during this difficult time, you can now have memorial trees planted in a National Forest in memory of your loved one.
Funeral services provided by:
Bryan-Braker Funeral Home
MAKE A DONATION
MEMORIES & CONDOLENCES
2 Entries
Fond memories of our family get-togethers - we'll miss his and Judy's visits.
Thoughts, prayers and strength are wished for them and their family.
Jean Royle Coad
May 2, 2016
Good to have seen you before you took the last step of what we call life.
Lionel Royle
May 2, 2016
Showing 1 - 2 of 2 results