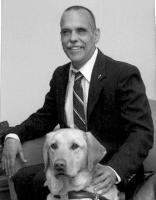 On January 23 at 9:56 p.m., Steven Joseph Burckhard was able to see his family and friends for the first time. Steven was born to Mary and Adam Burckhard on Aug. 4, 1954 in Yakima, WA. He was a premature baby and was blinded shortly after birth due to excessive oxygen in an incubator. In 1960, his family moved to Vancouver in order for Steven to attend the State School for the Blind where he graduated in 1974 as Valedictorian.
Steven was extremely adventurous and loved challenges, so he continued his education at Clark College in the auto mechanics program. He became very proficient at engine/auto repairs, especially on brakes, and he was the first person family and friends called when they had an auto problem.
Steven was employed at Blind Enterprises of Oregon where he ran a machine making name tags for the military. He worked his way up to Supervisor and was sent to North Carolina to learn how to operate new machinery. Steven's love of his job required him to take a two hour plus daily car/bus transfer to and from work every day. Due to health issues, Steven was forced to retire in 2012.
Following retirement, Steven enjoyed being an active member of the Eagles where he was a trustee for several years. He enjoyed following the Seahawks, Mariners, and Trail Blazers and spending time on his ham radio.
Steven was preceded in death by his parents; his older brothers, Dennis and Edward; and his two guide dogs, Ringo and Jericho.
He is survived by daughters, Katie Burckhard and Koren (Allen) Meyer; grandchildren, Emma and Elijah Meyer; sisters, Marveline Burckhard, Jeanette Burckhard and Lisa Truax-Thomson; brother, Duane (Sandy) Burckhard; niece, Kimberly (Bill) Lavalley; nephews, Scott (Kristin) Burckhard, Mark (Angela) Burckhard, Darren Truax Jr., and Parker Truax; his guide dog, Niven; and numerous other relatives.
A Catholic service will be held on Sat., Jan. 31, at St. Joseph Catholic Church with a Rosary at 9:30 a.m. and Mass at 10:00 a.m.
Memorials can be made to Guide Dogs For The Blind, 32901 SE Kelso Road, Boring, OR 97009.
Please sign his guest book at: www.columbian.com/oibts.

Published by The Columbian on Jan. 29, 2015.
To plant trees in memory, please visit the Sympathy Store.
MEMORIAL EVENTS
To offer your sympathy during this difficult time, you can now have memorial trees planted in a National Forest in memory of your loved one.
Funeral services provided by:
Hamilton-Mylan Funeral Home, Inc. - Vancouver
MAKE A DONATION
MEMORIES & CONDOLENCES
17 Entries
It is with great sadness that I learned about the passing of Steven. I will miss our conversations. Steve was my friend and student at Clark College. He was a tenacious student. During his course of study Steve would try anything, including welding. That did not go so well but he tried and that was the core of Steve. Don't tell me I can't do something, let me tell you! What a passion he had of cars. I remember one day he wanted to refinish the brake drums on a car that he was doing a brake job on. I was a little leery that he might get hurt using the brake lathe. After some training I watched Steve turn his first brake drum with flawless accuracy. By the way, nothing was done to modify the lathe for Steve's sake. Amazing student! He continue to amaze all of the instructors he had at Clark. The most admirable traits that defined Steve was his character, compassion and positive attitude. Everyone that met or knew Steve was amazed by him. God bless Steve. . .
Rick and Ellie Tymer
Rick & Ellie Tymer
June 22, 2015
Awe, Steve, I just heard from a friend that you went "home". I love you, my friend, Even though I haven't seen you for quite some time, I feel the loss. I wish I could have spent more time with you. Using your own words I would describe you as "good people"
Kim Bair
April 10, 2015
Steve you are my Best Friend,so many things I think about that we did, you and I and Wild Bill and any one who know's you know's who wild Bill is,I know as you arrived in Heaven, Wild Bill was waiting for you in the 34 chevy to take you the rest of the way,May you rest in peace my Friend, I Love you,I can not phatham that you are not here
Rick Rought
March 3, 2015
My thoughts and prayers go to Steve's family. He was a good man. Steve was always thoughtful, kind and happy. He will be missed.
Rosalie Teuscher
February 19, 2015
My Uncle Steve was always adventurous, courageous and independent. Only people who did not know Uncle Steve would ever used the word "handicapped" when describing him.

To me he had more courage than most people have I met, and much, much more integrity. Uncle Steve could have stayed at home and collected SSI benefits from the government due to being blind. Instead, he choose to work, and endure a 2 hour bus commute (each way), because that was who he was, and how he was raised.

While I will miss Uncle Steve on earth, I am excited he will get to be reunited with his parents, Adam and Mary, and his brothers Dennis and Edward. And he will be able to see them, and the world for the first time. Although I have always thought Uncle Steve, while on earth, saw the world in a better way that most of us with sight. I love and miss you Uncle Steve.
Scott Burckhard
February 10, 2015
Family has always been a bedrock of the Burckhard's. The lose of Uncle Steve will leave a gap that can never truly be filled. I love you Uncle Steve. Godspeed.
Mark Burckhard
February 6, 2015
Steven was a wonderful brother who probably was the only person who didn't know he was blind. Steven thought he could do anything and he usually did. He was always there for family and friends. It is a blessing to know that he is in heaven with many relatives and friends and is able to see how funny we look. I can hear him laughing. Will always love you little brother.
Duane Burckhard
February 6, 2015
I'm saddened to learn of Steve's passing. I have known Steve for a very long time. We attended the blind school at the same time. After school we became close friends and traveled together along side our spouses. I enjoyed the times we shared and will often look back on them. My thoughts and prayers go out to his family..
Carol Rushton
February 5, 2015
Although I never knew of Steven, my Mother and I have always said that, people with disabilities so much of the time can accomplish more in whatever life-time they have, than so many of us that DON'T have a disability. Honestly; isn't that the truth?!
That wonderful picture of Steven and his dog, looks like BOTH of them are validating and so very proud of the other. We lost our Mother last Oct. at 74 from a Stroke. So we have a sense of your loss. May we all see our beloved someday soon.
With Love,
Bob Brne.
[email protected]
Bob Brne.
February 3, 2015
I can vouch for Steve's auto repair skill. I took my grandson, Thad Nelson's, car to Steve after Thad broke down on I-5, South of Chehalis, WA. Steve put it back on the road. My sympathy to the Burckhard family. Ken Herman
Kenneth Herman
February 1, 2015
I will vouch for Steve's auto repair skills. I took my grandson, Thad Nelson's, car there after it broke down on I-5 South of Chehalis, WA and he put it back on the road. My sympathy to the Burckhard family. Ken Herman
Kenneth Herman
February 1, 2015
Our prayers and thoughts to all the Burckhard families.
Steve was an inspiration to all of us. Even though he lost his sight at an early age, he perservered and lived a full life. Thank you to all of you who touched his life and gave of yourselves to make his life better. You were his eyes to this world and we're sure he gave you the gift of "seeing" life in a more deeper way. God bless you all. Love Mark and Debbie Roy, 1st cousins from Yakima.
Mark Roy
January 31, 2015
Condolences to extended Burckhard family...

Respectfully,
Kenny and Danny Cochran
Kenny Cochran
January 30, 2015
Aww Steve, have some great memories of you and my Uncle Bill. We had some fun times way back. So sorry to hear of your passing. R.I.P.
Laurie DeHaan
January 30, 2015
You are Loved and will be missed by all in Portland
Donna Dukart-Smith
January 30, 2015
Steven, I miss you so much. You were very much loved. Don't know what to do with out you.

Your loving sister, Marvey.
January 29, 2015
Will miss steve,he was always there. Good friend of the family,shared many campfires.
Brian Moodenbaugh
January 29, 2015
Showing 1 - 17 of 17 results