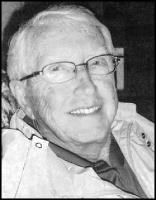 Born of wonderful parents, Clara Hansen and Byron Hogge in Elko, NV, April 28, 1937, Rollin Byron Hogge went to his forever home Sept. 8, 2021, at the age of 84. Before he passed from renal failure, he was able to FaceTime each family member to express his love and to be loved back. He often said that “I lived an idyllic life in Elko.” He leaves wonderful memories with siblings: Jeanene Danner and Coleen Adair (Elko, NV) and Marvin Hogge (Peggy) (Orem, UT).
Rollin excelled in his foreign mission for The Church of Jesus Christ of Latter-day Saints in Geneva, Switzerland and Marseilles, France for 30 months. He attended college at BYU, where he remembered subsisting on cans of creamed corn to independently finance his education. He graduated with a B.S. and M.S. before going into the Army for three years in El Paso, TX.
In his first marriage, he came away with four wonderful children: Stuart (Debbie) Hogge with two grandsons Spencer and Joshua (Bothell, WA); Sean Hogge (Moses Lake, WA); Lani Ann Malig with grandson lkaika (Honolulu, HI); and Jennifer Leilani Williamson (Stephen) (Boise, ID). Rollin’s greatest joy was his family. Years later, he walked into a singles LDS dance one Friday night in the Seattle area and captured the attention of his forever wife, Brenda Cline Reiner. Yes, with Rollin’s shiny shoes and dancing moves, she was smitten. He married Brenda Dec. 11, 1987, in the Seattle Church of Jesus Christ Latter-day Saints temple, and soon obtained jobs in Medford, OR.
In 2011, they moved to Vancouver, WA, to be closer to their children. A valiant church member, Rollin lived his faith in service, work, and playtime activities. He was a meticulous gardener. He also enjoyed kayaking, swimming, oil/acrylic painting, reading, and woodworking.
In addition to his children listed above, Rollin loved and was loved by Brenda’s children and grandchildren: son, Bret Reiner (Rachael Houdroge) (West Linn, OR) with children Andon Reiner and Sienna Reiner, Nadine Houdroge and Olivia Baranzano. Also loved was daughter, Lorinda Kirkland (Nazih Hijaouy) (Wilsonville, OR) with children Malea Kirkland and Kyle Kirkland. He was the favorite brother-in-law to Brenda’s sisters, Barbara Ingraham (Spokane), Phyllis Bartalamay (Everett), and Selena Nieman (Gig Harbor).
He is survived by his spouse, brother, sisters, six children and nine grandchildren all listed above as well as numerous nieces and nephews. A memorial service was held Sept. 11 in his local LDS chapel in East Vancouver. Memories can be shared on the website of The Columbian newspaper in Vancouver, WA.
Please share a memory @ www.columbian.com/obits

Published by The Columbian on Sep. 24, 2021.
To plant trees in memory, please visit the Sympathy Store.
MEMORIAL EVENTS
To offer your sympathy during this difficult time, you can now have memorial trees planted in a National Forest in memory of your loved one.
MAKE A DONATION
MEMORIES & CONDOLENCES
0 Entries
Be the first to post a memory or condolences.