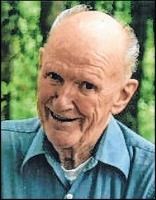 Robert William McDonald was born Sept. 25 1922 in Charlo, MT, to William Matthew McDonald and Lucinda Keller McDonald. The second child of five children. He died May 26, 2021, in Vancouver WA.
He enlisted in the US Army Jan. 12, 1943, and became a military policeman. He saw duty in Normandy Northern France , Rhineland, Central Europe and Northern Africa. He was also stationed in the Pacific Theater. He was proud to be a soldier. After returning from his military service he worked in the ship yards in Bremerton, WA. He met and married Navy veteran Patti Pauline (Maxwell) Mc Donald. They had five children, Janeinne Louise Wilson, Deniece L. Costello, Lenore P. Layman, Sheilah L. Schlosser and Shawn D. McDonald, all of Clark County WA. He has 12 grandchildren, 19 great-grandchildren and three great-great-grandchildren.
After the first two children were born his family moved to Vancouver, WA, where he secured a job with BPA as a electrical forman installing substations all over the northwest. He retired after 36 years in 1980. He then worked a short time in Alaska.
He enjoyed family, raising cattle, hunting and fishing with his brothers, nephews, friends and his special times with his son Shawn all his life. He had found the loving companionship of his sweetheart Nan Baird. He will be missed by many including nieces, nephews and a special cousin Jean Wanschaff of Wenatchee, WA.
There will be a graveside service Friday, June 4, at Evergreen Memorial Gardens 1101 NE 112th Ave, Vancouver, WA 98684 at 1 p.m.
Please share a memory @ www.columbian.com/obits