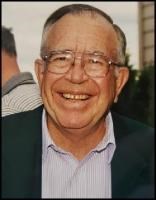 Robert (Bob) Wells Bratton passed away Monday, Oct. 18, 2021. He was 90 years old. He leaves a sister, Nancy Paterson; daughter, Christine Elias (Len); son, Michael Bratton (Amy); and grandsons, Jon and Matthew Elias.
He is predeceased by his parents, Robert and Alma Bratton; wife, Aileen Bratton; brother, Walter (Jerry) Bratton; and son, Dan Bratton.
Bob was born in Chehalis, WA, Feb. 26, 1931. During his early years, the family lived in New York City, Belevedere, NJ, and Walla Walla. The family finally settled in Olympia in 1938.
Bob attended Whitman College. His grandfather, Robert Bratton, was president of the college 1936-1942. While at Whitman, Bob earned 11 varsity letters. Three in track (sprints), four in football, and four more in tennis. He was Conference Singles Tennis Champion his junior year. He also earned the Niles Trophy as Co-Captain of the football team.
Bob was president in the Letterman’s Club and his Fraternity, Beta Theta Pi. He remained active in his beloved fraternity. He was selected “Who’s Who” among students in the publication America’s Universities and Colleges.
He stated that the highlight of his time as a Whitman student was meeting Aileen Connolly. In 1954, she became his wife of 63 years.
Bob maintained strong ties to Whitman, serving on the Alumni Board, Board of Overseers, and also served as Alumni President.
At the time of graduation, the Korean War continued. Bob enlisted in the army. Three weeks after he joined, the War ended.
In 1956, Bob accepted a job with IBM. He stayed with IBM for 15 years until he was appointed Deputy King County Executive, by then-County Executive, John Spellman. Bob said, ‘it was the best job he ever had.’ During his time there, the NFL announced intentions to add two expansion football teams. Bob, Spellman and Norm Maleng put together a presentation, flew to NYC and delivered their bid for a Seattle franchise. Seven cities in all submitted their intentions for teams. According to the three-man team, “Bob was the numbers guy.” Their presentation paid off. In 1974, Seattle was awarded a franchise. The Kingdome was completed, and the Seahawks played their first game in a sold-out Kingdome September, 1976.
Bob’s avocation was politics. He was Legislative District Chairman and State Finance Chairman for the Republican party. He and Aileen hosted many party meetings from their own living room. John Spellman was elected governor in 1980. He appointed Bob to Chairman of the Utilities and Transportation Commission, a six year term.
After retirement, Bob and Aileen spent twenty winters enjoying the sun and golf in Palm Desert. In 2015, they moved to Vancouver, WA, to enjoy their twilight years closer to family.
Please share a memory @ www.columbian.com/obits

Published by The Columbian on Nov. 14, 2021.
To plant trees in memory, please visit the Sympathy Store.
MEMORIAL EVENTS
To offer your sympathy during this difficult time, you can now have memorial trees planted in a National Forest in memory of your loved one.
MAKE A DONATION
MEMORIES & CONDOLENCES
1 Entry
RIP, Thank you for all you did for Washington State.
Edie Ingersoll
November 14, 2021
Showing 1 - 1 of 1 results