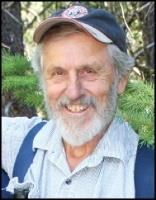 Dick grew up on a dairy farm at Brush Prairie, WA, the second of six children born to Werner John and Gertrude Minnie Jenny. He was an energetic youngster and recognizing that Dick’s initiative and imagination should be managed toward positive outcomes. Dick’s father began teaching him skills such as operating a tractor, milling lumber, and welding at age 12. Dick exhibited an aptitude for operating equipment and achieved a respectable level of proficiency by his late teens. Dick graduated from Battle Ground High School in 1957 and attended Clark College for two years. He went to work in the logging industry where he mastered the craft of felling big trees, operating a bulldozer, and driving log trucks, developing a reputation as a versatile and capable production-oriented logger. He also worked for the US Forest Service for a summer and learned to grade roads. He built on these skills throughout his early career and became proficient in operating a variety of heavy equipment.
Dick’s other interests included car racing, and he and his brother Donald raced a Volvo 544 for a few seasons. He worked on cars and went deer hunting with friends, and through these friendships met his first wife, Marilyn Slothower. Dick and Marilyn were married in August 1960 and after their first child, Marie, was born, Dick took a job at Boeing as an Expediter. Dick and Marilyn’s son Rodney was born in 1963 while the family lived in Seattle. Although Dick enjoyed his job at Boeing, he missed working in the woods and left the city to return to logging.
In 1970, Washington Department of Natural Resources hired Dick as a bulldozer operator. This was an important event marking the beginning of what became a long career with the agency. Dick’s position evolved from a career seasonal to a year-round job. Beginning as a heavy equipment operator, Dick’s work at DNR included time as the leader of a Larch Corrections Crew and culminated as supervisor of the heavy equipment crew for the Southwest Region. The work was distributed across Wahkiakum, Cowlitz, Clark, and Skamania Counties and focused mainly on forest road repair and maintenance. Except for a two-year break, Dick worked for the DNR until his retirement in 2003.
Dick left the DNR to work for a time in Alaska, running a logging operation for Louisiana Pacific from 1974 to 1976. The family lived on the Kenai Peninsula where the children were home-schooled due to the absence of a school in their remote community. The market for wood products changed, so Louisiana Pacific downsized their operations and Dick moved his family back to Clark County.
After their children were grown, Dick and Marilyn divorced in 1987 so they could pursue separate lives. Dick met Susan VanLeuven while they both worked at Department of Natural Resources and their friendship grew around many common interests. Dick and Sue were married in September 1991 and Sue was able to pursue her career objectives with Dick’s support. By the time Dick retired, Sue was working most of the year for Washington Department of Fish and Wildlife. She eventually secured a permanent position at WDFW’s Klickitat Wildlife Area and in 2009 the couple moved to Goldendale, WA. Dick enjoyed rural living, cutting firewood and taking his dog on walks and short trips while Sue was at work. Dick sometimes performed volunteer work at the wildlife area, and Sue appreciated his expertise as well as his company.
Dick’s hobbies included building sailboats, sailing, and carving wood with power tools. He built three sailboats, each one larger than the one before it. He loved working with wood and western red cedar was his favorite wood carving medium.
One of Dick’s outstanding qualities was his willingness to teach others his skills. This was a theme throughout his life, on and off the job. Many people learned to drive trucks, operate heavy machinery, use power tools, and figure out solutions to construction problems under Dick’s mentorship.
Dick was preceded in death by his parents and his sister, Mariann Baney. He is survived by his wife, Susan VanLeuven; his children, Marie (Art) Nelson, and Rodney (Michelle) Jenny; his grandchildren, Sharlyn (Joe) Young, Heather Collins, Daniel (Hayley) Nelson, Zina Jenny, Lena Jenny, and Hannah Jenny; and great-grandchildren, Bailey and Liam Young, Aislyn Collins, and Claire Nelson.
Please share a memory @ www.columbian.com/obits

Published by The Columbian on Nov. 14, 2021.
To plant trees in memory, please visit the Sympathy Store.
MEMORIAL EVENTS
To offer your sympathy during this difficult time, you can now have memorial trees planted in a National Forest in memory of your loved one.
MAKE A DONATION
MEMORIES & CONDOLENCES
1 Entry
Dick is my Grandmother's (Bobby Scheel) nephew. Because my Dad (Larry Scheel) spent a lot of time at the old dairy and sawmill so did I. One of my fondest memories of childhood was playing in the old barn and what made that so special was the time Dick and Donald spent with us. The tunnels and forts they wove throughout the hayloft were nothing short of incredible to a young child. I also felt privileged to work in the Forest Service with my Great Uncle Wern. The most special memory I have of him is a trip from near Caldwell, Idaho. I was driving truck at the time and he rode home from there with me. We talked for hours and I've also not forgotten that.
steve scheel
Family
November 24, 2021
Showing 1 - 1 of 1 results