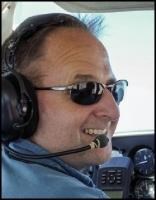 Captain Nelson Scott Brown, age 60, of Vancouver, WA, went to be with the Lord May 25, 2021, due to complications from an infection following a successful stem cell transplant. Nelson was born to John and Betty Brown June 30, 1960, in Portland, OR. Nelson’s dad was a pilot and he took his first airplane ride when he was only days old.
Following his graduation from Evergreen High School in 1979, Nelson attended Portland Community College to become an Airframe and Power Plant mechanic. Nelson worked at Hatch Engine Service, Aero West, and Sports Air Travel as an A & P mechanic.
His dream, however, was to fly. While working as a mechanic he continued obtaining his pilot ratings and went to work for Bergman Photographic Services where he flew a J3 Cub, a Cessna 210, and Cessna 180. In 1998, Nelson moved his family to Bellingham, WA, flying a Beaver on floats and a Conquest for Haggen Foods/Allsop. In 2000 he was hired by Horizon Air. In his 21 years at Horizon, he flew the F28, CRJ700, Q400, and the E175.
Never leaving his mechanic skills behind, he obtained his Inspection Authorization (IA) and started his own business, Nelson Brown Aircraft Repair. When he wasn’t flying for Horizon, he was a sought-out A&P/IA by many airmen to maintain their aircraft.
Nelson accepted Jesus Christ as his personal savior as a teenager and was a longtime member of Laurelwood Baptist Church. It was at Laurelwood he met his wife, Jennifer, and they married there in 1987, leaving the ceremony in his J3 Cub.
Nelson was preceded in death by his father, John. He is survived by his wife, Jennifer; daughter, Shayla; son, Brandon; his mother, Betty; a brother, Irvin (Brenda); two sisters, Marlis and Indy (James). Also, four nieces and a nephew.
Nelson’s celebration of life will take place at Laurelwood Baptist Church, 17015 NE 6th Street, Vancouver, WA, on July 10, 2021 at 11 a.m. followed by a BBQ. For the live stream link please contact the family or the church.
Please share a memory @ www.columbian.com/obits

To plant trees in memory, please visit our Sympathy Store.
Published by The Columbian on Jun. 6, 2021.
MEMORIAL EVENTS
Jul
10
Celebration of Life
11:00a.m.
Laurelwood Baptist Church
17015 NE 6th Street, Vancouver, WA
MAKE A DONATION
MEMORIES & CONDOLENCES
4 Entries
My thoughts and prayers are with Nelson's family. I had the privilege of working with Nelson. He was a fine pilot and a great mechanic. He maintained my a/c for 15 years.He always had time for conversation. He was a kind person. R.I.P Nelson.
Ronald Coleman
Work
July 9, 2021
I am very sorry to hear of Nelson's passing. I haven't seen him in many years though there was a time when we hung out almost daily. Those were some good times and good memories. My condolences to Betty, Jennifer and family.
Dale McKenzie
Friend
July 3, 2021
I met Nelson in 2010 through John McKibbin and two owners of a 1967 Cherokee 180 who let me join as a partner in the Cherokee. I like to think Nelson came with the airplane ;-). If any work needed to be done on our Cherokee, Nelson was the only A&P that touched it. Anytime Nelson came to work on the Cherokee, it was a treat. Nelson loved to talk about anything aviation related; from aircraft parts and operations to interesting flights and experiences, and he really knew airplanes. If there was more than one person (Nelson) in the hangar, work wasn't getting done very quickly because we were all having a great time chatting. The work always got done, and no one pampered our Cherokee 180 like Nelson. 60 is way too young to pass, and I will definitely miss Nelson and mourn his passing. My condolences to his family and to all who knew Nelson. I will hold you all in my prayers. Paul
Paul Montague
Friend
July 1, 2021
Jennifer and family. The sky has a new shining star and heaven has a new angel watching over his family and friends. You and your family have been in our thoughts and prayers ❤.
God’s blessings be with you thru this difficult time.
Earl and Diana Bliss
Earl and Diana Bliss
Friend
June 9, 2021
Showing 1 - 4 of 4 results