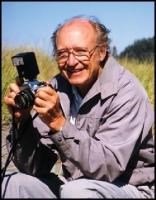 At 101 years old Morris was the last Portin from, The Greatest Generation. Born to Felix and Ellen Portin in a Swedish farming community knows as “Pioneer” near Ridgefield, WA, he was the fourth of seven children: Elsie Baker, Glen, Henry, Arnold, Vernon, and Lloyd.
Early years on the farm included daily chores with the animals, working the fields with his dad and brothers, swimming in the nearby Lewis River, eating fresh berry pie, walking a mile to attend a two-room schoolhouse, playing baseball, the clarinet, and attending the community church.
Morris graduated from Ridgefield High School in 1939 then took a year off working at Padden’s Dairy milking cows and delivering milk to save money to attend Edison Vocational School in Seattle. He studied Radio theory and repair then worked for the William C Hamilton Co repairing specialized electrical equipment.
Shortly after the US entered WWII Morris and two friends enlisted in the Army Air Corps studying Ultra-high frequency theory and Radar at several colleges including Stanford University. Morris was deployed in 1944 with the 565th Signal Aircraft Warning Battalion as a Radar Specialist to New Guinea and the Philippines in preparation for the invasion of Japan. He soon went on Detached Service with Armed Forces Radio and served on the nearby island of Biak, where he operated radio station WVTG. After the war ended, he worked at radio station WLKB in Niigata, Japan, rebroadcasting programming received from San Francisco to troops in the area.
When Morris returned to the US, he attended Portland Foursquare Church where he met and married Marie Radmacher in 1947. They were married 65 years until Marie passed in 2012. They had 5 children; Carolyn, Dave, Jim, Doug, and Donna and enjoyed snow skiing, waterskiing, and camping together. Even at 88 years old (and blind) he buckled on a life vest, a pair of waterskies, and plunged in the cold water next to the ski boat ready to go waterskiing! They attended Living Hope and East Hill Foursquare church.
“Morrie” became interested in photography and soon owned Gateway Portrait Studio, and later set up Race Track Photo Service. He worked many years “shooting” portraits, school photos, weddings, and church directories. He also ran the photo finish at Portland Meadows and Multnomah Kennel Club. Photography suited “Morrie” well because he could always bring a smile to someone’s face. He was positive, encouraging, friendly, and kind to all.
Morris believed in staying active and one of his sayings was “Use it or Lose it.” Even after advanced glaucoma took away his eyesight, Morris lived at Gresham Manor where he was able to live and eat with friends and follow the Portland Trailblazers. He continued to exercise regularly, staying active, positive, and grateful to the end.
He was preceded in death by his wife, Marie; daughter, Toni Burbank; and son, Doug Portin. Complete obituary on Lincoln Memorial Park website.
A memorial service will be held at 1:00 p.m., Sunday, Nov. 7, 2021, at Lincoln Memorial Park located at 11801 SE Mt. Scott Blvd, Portland, OR.
Please share a memory @ www.columbian.com/obits