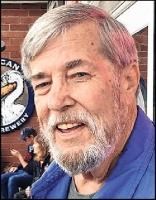 Capt. Michael Kenneth Zachary, 78, died Sept. 28, 2021, following a cardiac event. The only son of Marie (Metteer) and Kenneth Zachary, he was born in Oregon City, OR, and enjoyed a happy but mischievous childhood in Moro, OR, with his three loving and vibrant sisters. He matriculated to Western Oregon University (or “OCE” in those days), where he met Sally, who would eventually become his “lovely bride” and companion of more than 50 years.
A graduate of the California State University Maritime Academy, Mike started as a deckhand on a tugboat and eventually became a Columbia River Pilot providing maritime pilotage services for the ports of the lower Columbia and Willamette Rivers. Along the way, he and Sally settled in Vancouver, Washington, and raised their children, built their community, and vacationed in the mountains and on the coast with their dear friends from college and beyond. They spent their retirement years as “snow birds” who split their time between Phoenix, AZ, and Lincoln City, OR.
Mike is survived by his adoring and fiercely independent daughters, Jennifer Zachary and Heather Zachary (Andrew Jurgens); and his doting and indulgent sister, Patricia Bourdeau (Dennis).
A big man with an even bigger heart, Mike was unfailingly generous. His family and friends will miss his deliveries of homemade smoked salmon, colorful colloquialisms, cartons of ripe Oregon strawberries and juicy Arizona citrus, and clever one-liners. The world was both sweeter and funnier while Mike was in it. May he ever have fair winds and following seas.
Please share a memory @ www.columbian.com/obits

Published by The Columbian on Oct. 2, 2021.
To plant trees in memory, please visit the Sympathy Store.
MEMORIAL EVENTS
To offer your sympathy during this difficult time, you can now have memorial trees planted in a National Forest in memory of your loved one.
MAKE A DONATION
MEMORIES & CONDOLENCES
4 Entries
So sorry to hear of Mike's passing. Friends from high school who kept in touch over the years. I will surely miss our weekly phone conversations.
Walt Reed
School
October 22, 2021
I knew Mike by working with him on the river tugs....he, Walt, Jay and others of the crew made working around this crew special....his laughter, and good heart made the tour onboard easy to handle....Mike would often talk of his special Sally and the,"girls"....after he got back from Prudho Bay he even named his dog Mukluk for fond memories......I was able to join Mike again while working with the Columbia River Pilots.....an excellent teacher and partner....Mike was patience with his instructions and developed an excellent reputation for his, "..natural" skill of passing on river information. After his retirement I would hear stories of him coming back into town, to stir the pot! We will miss Mike and Sally and family....humor and smiles will be and are etched in our hearts. The watch has changed Mike, rest easy my friend.
Doug Burrows
Friend
October 4, 2021
It was special to know Mike. He loved his family and had a big heart and showed it. He would want his family to be comforted in the many loving memories the heart holds on to. We are so sorry for your loss.
Laura St John
October 3, 2021
Michael will be so missed by all of his family and friends. He was such an incredible volunteer and supporter of the credit union for years and years. I absolutely loved getting to know him and spend time with him. He had such a giving heart and his family came first to him. Never a doubt about that. Gary and I send our deepest sympathies to you Sally and Heather and Jennifer. Thinking of you.
Joanne & Gary Pearson
Friend
October 2, 2021
Showing 1 - 4 of 4 results