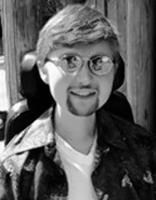 Matthew Wallace was a kind and gentle person, a peacemaker enlightened by Buddha and Mother Earth. He was strong despite the fact that he could only move the tip of his finger. Matt may have been physically immobilized by Duchenne Muscular Dystrophy, but he was able to touch people around the world and at home with his writing. He believed in "Justice for All," with a blind eye to color, ability or persuasion. He abhorred and spoke out against the politics and politicians who spewed hate, intolerance and religious righteousness.
Matt loved music, science, Lego, anime, sci-fi, cat videos, and a good laugh.
Matt lived until he was 32 years old. He served as the Goodwill ambassador for the Portland, OR/Vancouver, WA Muscular Dystrophy Association and was on the C-TRAN Paratransit Citizens Advisory Committee in Vancouver. He earned an Associates of Arts degree at Clark College.
Matt is survived by his parents, Lt. Col. John Wallace (Retired) and former state representative, Deb Wallace; his sister and brother-in-law, Andrea and Cory Freeborn; his brother, Gerald Pickford; and his nieces and nephews, Cherish, Alex and Jack.
Services will be held Sat., Jan. 16, 2016, 1:00 p.m. at the State Capital History Museum Coach House, 211 21st Ave. SW, Olympia, WA 98501.
Please leave memories at www.FuneralAlternatives.org and www.columbian.com/obits.
Published by The Columbian on Jan. 10, 2016.
To plant trees in memory, please visit the Sympathy Store.
MEMORIAL EVENTS
To offer your sympathy during this difficult time, you can now have memorial trees planted in a National Forest in memory of your loved one.
MAKE A DONATION
MEMORIES & CONDOLENCES
3 Entries
Dear John, Deb, and Andie,
Matt was one of the bravest and most positive man we have ever known. Despite his constant challenges, neither of us ever witnessed him complain or indicate he was fed up with living. He was always up for something new to try. What a "gamer" he was!
Chris & Ross Montgomery
January 13, 2016
Dear Wallace Family,
Our hearts go out to you on this very sad occasion. We had the honor of meeting Matt a few times and what a blessing that was. We have followed right behind your family on this journey through life which also happens to include a diagnosis of Duchenne Muscular Dystrophy. Matt gave us and continues to give us inspiration and hope. The road is always so much easier when someone has paved the trail in front of you.
Our Love Forever, The Jensen FamilyJerry, Heather, Josh and Luke
The Jensen Family
January 10, 2016
Even though I did not know Matt personally, I want to express my condolences to the family. As a resident of the Hearthwood neighborhood I was aware of Matt's special place in the heart of his family and especially you, Deb. I am so sorry for your loss but glad for the time that you had together with him.
Luana Nery
January 10, 2016
Showing 1 - 3 of 3 results