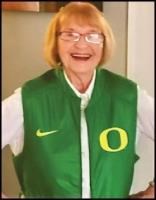 Marvel Mosteller passed away peacefully in Portland, OR. She left this world holding her wedding picture saying she was going to a party - and going home.
Born to James O’Brien Coon and Edria Finnegan Turpin, she grew up in Independence, OR, in their beloved house on 86 3rd Street, where she married Cecil R. Lamb on March 4, 1944. Moving to Phoenix, AZ, for a decade, she returned home a single mother working at State Farm’s Head office in Salem, going to night classes, passing exams for a promotion, finding out they were only given to men as Head of Households. Later she’d become the first person to graduate with two degrees at the same ceremony, (Bachelors & Masters) in Library Sciences/Early Childhood Education at Oregon College of Education. Retiring as Superintendent of Schools - Scotts Mills District vacationing to Ocala, FL, where she met and married Guy Mosteller, living there for 25 years.
Marvel was a beloved member of her community as a Player at the Ocala Theatre; President of the P.E.O. Sisterhood and United Methodist Women’s Sunday School; as well as volunteer for Meals on Wheels. After Guys death in 2012, Marvel returned home to be close to family, eventually moving to Knights of Pythias Retirement in Vancouver, where she was of service to newcomers and neighbors as a 3rd floor representative, a book club, (never being without a book in her hands) and member of the knitting club. She loved playing cards, ‘Thirteen’ with family, and cheering for the Ducks on game day!
Marvel is survived by her daughters, Christine Lamb White (of Vancouver) and Jodi Pfaff (of Bend); sister, Rahna Magee (of Portland); brother, Jim Coon, who preceded her in death; Auntie Marvel to Jim Coon, Lori Singer and Michelle Piper (of Portland); Mammy to her grandchildren, Amy Childs, Mike Gall, and Tabitha Lovell, Beth Hunt and Scott Miller; as well as great-grandchildren, Taylor, Jalen and Jonah.
She loved her home saying she would never leave it. Recently the space next door to her apartment was transformed by her daughter Christine, donating furnishings from Marvel’s home to become the “Marvel Mosteller Tribute Nook,” bringing much joy, comfort and respite to residents. So apparently, she will stay on in spirit!
A Celebration of Life is planned in early 2022.
Please share a memory @ www.columbian.com/obits
Published by The Columbian on Dec. 31, 2021.
To plant trees in memory, please visit the Sympathy Store.
MEMORIAL EVENTS
To offer your sympathy during this difficult time, you can now have memorial trees planted in a National Forest in memory of your loved one.
MAKE A DONATION
MEMORIES & CONDOLENCES
0 Entries
Be the first to post a memory or condolences.