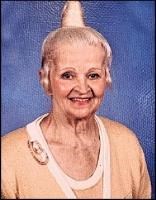 Marjorie Helene Hornberger, 96, of Vancouver, WA, died Sept. 20,2021 after a brief illness. She was born March 22, 1925 in Ruso, ND, to Fredrick and Synneva Hochsprung and graduated from Turtle Lake High School.
She married the love of her life Wallace L. Hornberger Sept. 12, 1953. They first lived in Yakima where she had a job as a photographer at the Hanford Nuclear Reservation. They then moved to Portland in 1955 when Wally began his 25-year career with PayLess Drug Stores. While in the City of Roses both of her children were born before moving to Corvallis in 1960. During her time in Corvallis, she was a homemaker and volunteered for a number of organizations. She was a Cub Scout Den Mother, President of Benton Country District of Camp Fire Girls and also became the President of the Willamette Region of the Oregon Lung Association.
In 1978 Marjorie and Wally moved to Vancouver, WA. During her years in Vancouver, she first worked at Comfort Interiors and then volunteered at both Devine Consign and at City Hall well into her 80’s. They also loved to dance and were long time members of both Tillicum and Owatonna Dance Groups that they joined while in Corvallis.
Marjorie loved being with her family and friends plus traveling and cruising the world with her husband.
Marjorie was preceded in death by her husband of 60 years Wallace in 2013. She is survived by her children, Marlow(Denice) Hornberger and Marja(Clyde) Holmes; grandchildren, Nicole(Tobias) and Reid(Bronte); and great-grandson Heron R. Hornberger who was just born in January of this year.
A private funeral and memorial service will be held for immediate family at Evergreen Memorial Gardens on Oct. 9, 2021. In honor of Marjorie monetary donations can be made to the Vancouver Rotary Foundation.
Please share a memory @ www.columbian.com/obits

Published by The Columbian on Oct. 8, 2021.
To plant trees in memory, please visit the Sympathy Store.
MEMORIAL EVENTS
To offer your sympathy during this difficult time, you can now have memorial trees planted in a National Forest in memory of your loved one.
Funeral services provided by:
Evergreen Memorial Gardens Funeral Chapel
MAKE A DONATION
MEMORIES & CONDOLENCES
2 Entries
Marlow - Sorry to hear of your mother's passing. Todd & Martie (we've rented your condo several times).
Todd & Martie Sinclair
October 10, 2021
I was blessed to know you and my life is forever changed because of you! Thank you Marjorie Thank you.
Shelley Collins
Work
October 9, 2021
Showing 1 - 2 of 2 results