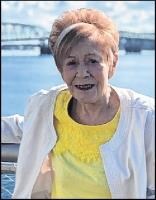 Marian Markley passed away peacefully in her home in Ridgefield, WA, on Dec. 3, 2021 at the age of 81.
Marian was born in Denver, CO, on June 19, 1940, to Miles and Winnifred Markley. She grew up in Denver until she went to college at Iowa Wesleyan University where she graduated with a degree in education. She taught elementary school in various locations including San Salvador, where she taught American students, and Las Vegas. Her home became Ridgefield, WA, in 1976 where she was a stay-at-home mother. She continued to use her teaching skills and became a “room mother” during her daughter’s early elementary school years. She eventually went back to teaching as a substitute at various schools in Clark County. In her late forties, Marian became interested in better health. She was an avid exercise enthusiast up until the last year of her life. She enjoyed walking and having personal training sessions where she could measure her improvements and be rewarded with positive feedback. Marian had a great love of cats and there probably wasn’t much time in her life when she didn’t have one. Her beloved cat, Noelle, lived to be 18 years old and passed away just over a month before she did.
Marian is survived by her daughter, Valerie Dewitz and son-in-law John Dewitz of Ridgefield, WA; as well as her brother, John Markley of Colorado; and half-sister, Paula Garb, of California.
Marian made friends easily and was loved by many. She has been described as sweet, funny, classy, elegant, and sparkly!
A celebration of life will be planned and posted at a later date due to COVID concerns.
In lieu of flowers, please consider a donation to Hospice Care Program, Kaiser Foundation Health Plan, Northwest, 2701 NW Vaughn Street, Ste 140, Portland OR 97210 or Humane Society for Southwest Washington which can be made online at hssw.org/give or mailed to 1100 NE 192nd Avenue, Vancouver, WA 98684.
Please share a memory @ www.columbian.com/obits

Published by The Columbian on Jan. 15, 2022.
To plant trees in memory, please visit the Sympathy Store.
MEMORIAL EVENTS
To offer your sympathy during this difficult time, you can now have memorial trees planted in a National Forest in memory of your loved one.
MAKE A DONATION
MEMORIES & CONDOLENCES
2 Entries
I have wonderful childhood memories of Marian when they came to town to visit. She was so funny, generous and most of all loving to everyone she knew. She was always dressed up and her hair styling in a beautiful red beehive! She smile could lite up a room, she was loved my many and will be missed. Prayers and hugs to Valerie and her family.
Vicki Bahr
January 17, 2022
I will always remember Marian's sweet and loving personality. She always made me smile and feel welcomed. My thoughts are with her family and friends whom will miss her dearly.
Cindy
Friend
January 15, 2022
Showing 1 - 2 of 2 results