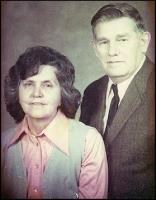 Louise S. Benedict, 97, of Ridgefield, WA, passed away of natural causes on Sept. 14, 2019 in Vancouver, WA. She was born April 25, 1922 in La Center, WA to Irish/Swedish immigrant parents.
Louise was in La Center’s music program and was one of the top 3 students in Clark County when she graduated.
She married Dan Benedict of Ridgefield on July 3, 1940, who preceded her in death as did a son, Corydon and a sister, Opal.
They made their home in Ridgefield where their five children, Jacquelyn, Glenda, Corydon, Janiece and Dennis were raised. She took great pride in their accomplishments as well as those of her 12 grandchildren and 27 great-grandchildren. She was their number one cheerleader whether it be in sports, music, academics or other endeavors.
Louise was a hard worker and spent many hours working the seasonal trades. She also worked for a time at Jantzen Knitting Mill.
She was a Girl Scout Troop leader, a member of the Ridgefield Methodist Church, and the General Federated Women’s Club. In addition, Louise also served as a volunteer in the HOST program in the Ridgefield Elementary School, as a reading tutor.
After her children and grandchildren, her loves in life were music, dancing and chocolate, not necessarily in that order.
Later in life, Louise enjoyed traveling, including several trips to Alaska, cruises with friends and winters in Arizona. Her travels also included trips to Saudi Arabia, Costa Rica and several locations in Europe.
Louise will be missed by all whose lives she touched.
There will be no funeral service at her request.
Please sign her guest book @ www.columbian.com/obits
To plant trees in memory, please visit our Sympathy Store.
Published by The Columbian on Sep. 29, 2019.
MEMORIAL EVENTS
No memorial events are currently scheduled.
To offer your sympathy during this difficult time, you can now have memorial trees planted in a National Forest in memory of your loved one.
MAKE A DONATION
MEMORIES & CONDOLENCES
2 Entries
Good memories of this beautiful lady. My sincerest sympathy to the Benedict Family.
Margaret Royle Svir
September 29, 2019
To the Benedict family, A long life well lived. So sorry for the loss of your loved one, Louise. Helen Hagen Emmons
September 29, 2019
Showing 1 - 2 of 2 results