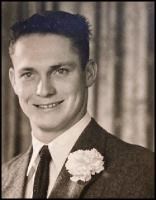 Larry arrived on earth in a pauper’s hospital in St. Louis, MO, to Cletus and Helen Malcom. After a few years in Marion, IL, the family moved west for wartime jobs in the Kaiser Shipyards of Vancouver, WA.
Larry graduated from Camas High in 1954 with non-contiguous attendance at Clark College and PSU centrally abutted by a stint in the US army. Larry qualified expert on many platforms and was a radio man for a heavy weapons company.
His overseas deployment was to Heilbronn West Germany where he met the woman who would make his life easier and better - his wife Erika to whom he was wed for 65 years.
Professionally, Larry spent nearly four decades in pulp and paper eventually becoming a color chemist for Boise Cascade where he traveled the nation solving manufacturing problems so the shade would be just right. He’d often use his frequent flyer miles to bring his wife on these trips. He worked on process improvements and inventions getting his name on three process patents.
Larry also side-hustled with car and appliance painting often utilizing bright colors. He was the original MacGyver by making many repairs using pen springs, golf tees, wire hangers and silicone adhesive.
He was also involved in the masonic lodge and Zion Lutheran church choir.
Larry was preceded in death by his parents; sister, Patricia; and daughter, Lisa. He is survived by wife, Erika; sons, Boyd and Matthew; brother, Jim; and grandson, Maxwell.
Please share a memory @ www.columbian.com/obits