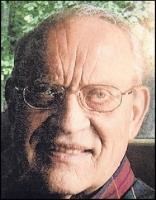 John E. Mors, 92, died Wednesday, Dec. 29, 2021, at Fort Dodge Health and Rehab. Arrangements have been entrusted to Gunderson Funeral and Cremation Services. No funeral or memorial will be held at his request.
John Edward Mors, son of John C. Mors and Helen “Irene” (Arnold) Mors, was born Sept. 3, 1929. John attended school and graduated in 1947 in Fort Dodge, IA. He then went to Iowa State College and graduated with a Bachelor of Science in Civil Engineering in 1952. He married Laurel Lehnus March 22, 1951. They celebrated their 70 wedding anniversary this year.
He was hired by the U.S. Dept. of Transportation and they moved to Montana. His job took them to many places, Gold Beach, OR, in 1956, Boise, ID, In 1960. He became the Director of Federal Hwys Projects over Washington, Oregon, and Idaho and moved to Vancouver, WA. During this time he received the Silver Medal Award from the Dept. of Transportation. He retired in 1978 and John and Laurel moved back to Iowa.
John went back to college at Iowa University and graduated with a Bachelor Degree in Farm Operation in 1979 and took up farming.
They moved back to Fort Dodge and he became very active in his volunteer work. Working with the Service Corp of Retired Engineers-Score, Fort Dodge Area Symphony, Blanden Memorial Art Museum, North Central Home Care, and Iowa Central Community College. He received the Governor’s Volunteer Award in 1993 for his volunteer work.
There was an article written about his community involvement published in The Messenger June 25, 2006. John’s picture is on the cover.
John and Laurel enjoyed many activities together. They taught Sunday school kindergarten for many years. They belonged to a group that went dancing monthly, cross country skiing on Mt. Hood when they lived in Washington, dinner parties and playing with his grandchildren.
He was a wonderful husband, son and grandfather.
He was preceded in death by his wife, Laurel (Oct. 2021); parents, John and Irene; brother, Gordon; son, Vernon Mors; and grandson, Rayn Mors.
Survivors include his children, Bruce Mors and Patsy Mayes of Portland, OR, Anna (Mors) Ajure of Montana; 9 grandchildren, 25 great-grandchildren, 5 nieces and 4 nephews.
John was a gentleman and a great example of how to live your life!
Please share a memory @ www.columbian.com/obits

Published by The Columbian on Dec. 31, 2021.
To plant trees in memory, please visit the Sympathy Store.
MEMORIAL EVENTS
To offer your sympathy during this difficult time, you can now have memorial trees planted in a National Forest in memory of your loved one.
MAKE A DONATION
MEMORIES & CONDOLENCES
1 Entry
My husband Ray and worked with John in the Vancouver office. He was a good leader, set a great example. He and Laurel were wonderful people; It was a joy to work and know them. We´re so sorry for your loss.
Cheryl Schadt
Work
January 4, 2022
Showing 1 - 1 of 1 results