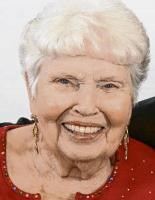 Joan Jeffries was born December 7, 1928 in Lacombe, Alberta, Canada to John and Ruth Payseno. Her formative years were spent on a small farm near Bismarck, North Dakota and later in various places in Oregon and Washington before ultimately settling in Vancouver, Washington.
Joan was first and foremost a mother - in the truest sense of the word.
She and Art Jeffries were married in 1948 in Bremerton, Washington and resided there for a few years before moving to Oregon. In 1959 they moved to Vancouver, Washington. That was their home for the remainder of their lives. She raised two girls - Kathleen Jeffries and Mary Miller (Ray) and seven boys - Mike, Pat (Rosie), Tim (Sue), Terry, Mark, John and Matt (Katie). Joan was instrumental in the lives of many other children. She was a surrogate mother to Linda Brown-Street and Bill (Patti) Fox. Many other friends became family members - such as Pat and John Erickson and Ralph Mueler. They are considered family to us. Joan was cherished as a Mother, a Grandmother, a Great Grandmother (Nana), a Godmother, an Aunt, and a Great Aunt.

Mom's family, her religion and children were the most important things in her life. She didn't wear her religion on her sleeve; she lived it every day in her actions and her beliefs.

Her upbringing, while living in a small tar-paper shack on a poor dirt farm in North Dakota, prepared her well for her role in life as a mother, caregiver, counselor and confidante.
She was humble yet feisty and fiercely independent. She had a kindness that knew no boundaries, a tenderness that could sooth any hurt and an undying, caring spirit. People were drawn to her because of her everlasting smile, her joyful laughter and her gift to truly listen. When you talked with her she made you feel like you were the most important person in her world. Children were her passion and "Nana's" hugs were met with enthusiasm and out-stretched arms.
Like Mom's heart, our home was never too full for family, friends and neighbors. She loved to host, to cook, to listen to music, to sing, to dance, to laugh. She loved to bake and our home was always filled with the aroma of our favorite recipes. Often times we would come home to find more friends than family at the table. All of her children have friends who have become family to us all.
Christmas, which included one and all, was her favorite time of year and the annual family camping trip was her favorite tradition. She loved to travel and, did we mention she loved to play cards?
She is survived by all her children, 18 grandchildren, 26 great-grandchildren, and her dear sister-in-law, Barbara Payseno, and her many treasured nieces and nephews.
She was preceded in death by her husband, Art Jeffries in 2008 and by her cherished brothers and sisters-in-law - Lloyd (Veronica), Harold (Frances) and Ken Payseno.
Funeral mass will begin at 9:30 a.m., Saturday, October 21st at Our Lady of Lourdes Catholic Church located at 4723 NW Franklin Street, Vancouver, WA 98663. A reception will follow at the Elks Lodge located at 11605 SE McGillvray Blvd., Vancouver WA 98683 (at the south end of Chkalov Dr.).
In lieu of flowers, and in the recognition of Mom's love for children, memorial contributions may be made to "Make-a-Wish of Washington and Alaska", 811 1st Ave., #550, Seattle, WA 98104.

Please sign her Guest Book at
www.columbian.com/obits.
To plant trees in memory, please visit our Sympathy Store.
Published by The Columbian on Oct. 18, 2017.
MEMORIAL EVENTS
No memorial events are currently scheduled.
To offer your sympathy during this difficult time, you can now have memorial trees planted in a National Forest in memory of your loved one.
MAKE A DONATION
MEMORIES & CONDOLENCES
13 Entries
My prayers and condolences are with the family. I always felt that she was a mother to all she met. She help me to look at things with a different view in my live. I am bless to have known her and the family.
Steve Holcomb
November 4, 2017
Terry and Family, Sending my condolences to you. So sorry for your loss.

Cheryl Gibson Benson
October 21, 2017
Joan was a incredible women of god, her family shows all that she was as they have become the kind of person she was always such a joy to be around and her smile was as big as her heart. I am sure her family will miss her dearly as will all that knew her. Rest in peace and dance with the angels and sing so everyone can still hear you here on earth. May all her memories get her family through this time of sorrow.
Valerie Weisenborn
October 20, 2017
Joan.....genuine and beautiful and yes feisty (I loved that)!! Joan will be forever missed but never, ever far from our hearts! Love and hugs to you all!!
Michelle Hoover Hanson
Michelle Hanson
October 20, 2017
My deepest sympathy to the entire family. I loved Joan dearly and she is a true example of an angel. I enjoyed playing bunco with her every month and sharing our stories of travel. She lived her life to the fullest and we are all so lucky to have been a part of it.
Tracey De Koeyer
October 19, 2017
We to are added to her list of friends and extended family. She was such a joy to see and spend time with. Never to be forgotten. With our greatest sympathies to the family. Kenny and Darlene
October 19, 2017
So sorry for the loss of your mother. We enjoyed getting to know her at Our Lady of Lourdes. Your family is in our prayers.
May she Rest In Peace.
Kelly & Sue McDonald
October 19, 2017
We will always remember Joan's smile and laugh. What a character! She made everyone feel like family.
Tom & Debi Johnson
October 19, 2017
Sorry for the loss of your mother. Your family is in our thoughts and prayers
Jon and Joan peterson
October 18, 2017
Words cannot describe this women,wife,mother,Nana,Aunt and friend, please leave a note and join us to celebrate her wonderful life!.
Terence Jeffries
October 18, 2017
Have never forgotten that warm hug and beautiful smile going back to the school days.
Lisa Nielsen-DuPere
October 18, 2017
Joan will be missed so very much. She was always wearing a happy smile. She always said "every day when I wake up I thank the lord for another day". I know she is with her lord now smiling down on us. She was loved by so many and will remain in our hearts forever.
rose koch
October 18, 2017
We only met Joan a couple of times but were impressed by her lovely inviting personality.
Wesley Downing
October 18, 2017
Showing 1 - 13 of 13 results