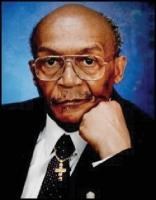 Jerome Harris was gathered into the arms of our Lord Oct. 31, 2021. He was 90 years young. Jerome was born April 21, 1931, in Chicago, IL, to Elnora and Jerome Harris, Sr. He was the eldest of three sons.
In 1948 Jerome joined the Army at the age of 17, shortly after the end of WWII. His first overseas duty was participation in the Berlin Airlift as a truck driver, helping to bring supplies to the people of West Berlin. Jerome also served in the Korean War and Vietnam War. A decorated Staff Sergeant his awards include the National Defense Service Medal, Armed Forces Expeditionary Medal, Vietnam Service Medal, Army of Occupation Medal (Germany) and Good Conduct Medal. Jerome retired from military service in 1974 after serving his country for 26 years.
Jerome Harris met Patricia Keaton, a divorcée with four young boys, at Ft. Campbell, KY. They were married in Tennessee Oct. 5, 1956. He became father to Val Layfette, age 5, Russell Fredrick, age 4, Glenn Derek, age 3, and Dale Patrick, age 2, whom he raised as his own. Sheryl Patrice Annette, their first child, was born in 1957, followed by Nora Cleanne in 1961, Melissa Marian in 1964, and Jerome Christopher in 1970.
The military took the family to many duty stations to include Kentucky, North Carolina, Colorado, and Germany, to name a few. After retirement, Jerome and family settled in the Pacific Northwest, Vancouver, WA. Post-military retirement he worked for Silver Wheel Freight Lines and retired for the second time from the Portland Provision Company.
Jerome Harris became a man of God in 1999 and was an avid studier of the Word. He was especially interested in biblical history, enjoying his daily morning ritual of biblical study and reflection.
Jerome enjoyed golfing until his wife Patricia gifted him with a set of golf clubs in the mid-1960s. Shortly after that, he quit his favorite pastime. It wasn’t until the 1980s when he confessed in a conversation that he quit because he did not want to hurt her feelings by letting her know she had purchased women’s golf clubs, instead of men’s. Bowling was another favorite pastime, and it was not unusual for him to score a perfect 300. He was once recruited to go professional but declined due to military service.
Jerome and Patricia were members of the Community A.M.E. Zion Church in Vancouver, where Patricia was the pianist. Patricia left us after a series of strokes. Jerome took charge of his wife’s care, refusing to place her in a care facility. She passed at home with him in 2007. Their marriage spanned 51 years.
Jerome Harris is survived by his daughters, Nora Cleanne Harris Barker and Melissa Chioma Aballa; his sons, Val Layfette Keaton and Glenn Derek Keaton; his grandchildren, Ashley Keaton, Corey Keaton, Cameron, Kacey Keaton, Joshua Harris, Daniel Barker, Gia Barker, Jack Keaton, and Sara Keaton; and his brothers, Alfred Harris and William Eiland.
Jerome will be laid to rest with full Military Honors at Sheridan National Cemetery in Lake Forest, IL. In lieu of flowers, the family requests donations to be sent to one of his favorite charities, Operation Smile, https://www.operationsmile.org.
Please share a memory @ www.columbian.com/obits