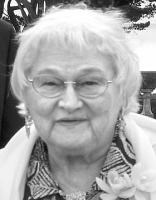 Jean Eileen Norwood (nee Neander) of Vancouver, WA, 95, died Feb. 3, 2015 after a brief illness due to complications from the flu. She was born May 2, 1919 in Wenatchee, WA to Stanley and Mabel Neander. Jean's father died in the Spanish flu epidemic 3 months after her birth. Her mother raised her only child in Silverdale, WA, where they lived in a log cabin and Mabel taught in a one-room schoolhouse.
Jean graduated valedictorian from Ballard High School and went to Washington State University before transferring to the University of Washington, from which she graduated with a degree in Mathematics.
In the run up to WWII, she met Gus Norwood, a graduate of the Naval Academy, who in 1941 became her husband until his death in 2006.
Jean served during WWII as a naval architect, designing ships with mathematical precision for stability and efficiency while Gus served with the Pacific fleet.
After the war, they came to Vancouver where Gus worked with the Northwest Public Power Association and Jean raised their 5 children, served on the PTA, the League of Women Voters, the American Association of University Women, the Women's Club, and served several terms on the Vancouver City Council.
In 1967, they moved to Juneau, AK where Gus led the federal government's Alaska Power Administration and Jean earned a Masters degree in Public Administration from the University of Alaska and worked in government affairs and as a financial analyst. They then moved to the Washington, D.C. area where Jean worked as a docent at the Smithsonian Institution. When they moved back to Vancouver in 1974, Jean worked with the YWCA and became a Master Gardener involved with arboretum development in Vancouver. After Gus passed away, Jean left her home at the historic Fisher house to live first at the Courtyard Village, then at Touchmark Village until her death.
Jean traveled her life with a passionate interest
in politics, people, and family. She nurtured her
environment and entertained her friends and family.
Always optimistic and upbeat, Jean had hoped to see 100, but it was not to be, and we all were cheated of 5 more years.
Jean is deeply mourned by her loving family and a host of friends. Her five children and their spouses are: Douglas Norwood (Bonnie Rowan), Emily Rando [deceased] (Robert Rando), Valerie Norwood (Joseph A. Jarrell), Eric Norwood, and Barbara Norwood (Robert Doyle - deceased). She is survived by seven much-loved grandchildren: Douglas, Mathew and Brendan Norwood, Oliver, Tobias and Mateo Rando, and Christopher and Katherine Jarrell; and five great-grandchildren: Atticus and Phineas Chu-Rando, James and Emily Rando, and Connor Norwood.
In lieu of flowers, the family requests that donations be made to the Jane Weber Evergreen Arboretum, 9215 SE Evergreen Highway, Vancouver, WA 98664 where a memorial service will be held and a bench under a lovely oak tree will be dedicated to her on what would have been her 96th birthday.
The Evergreen Memorial Funeral Home will preside at a private interment at 10:00 a.m., Sun., Feb. 8, 2015 at the Fisher Cemetery in Vancouver, WA.
Please sign Jean NorwoodÂ¹s guest book at:
www.columbian.com/obits.

Published by The Columbian on Feb. 6, 2015.
To plant trees in memory, please visit the Sympathy Store.
MEMORIAL EVENTS
To offer your sympathy during this difficult time, you can now have memorial trees planted in a National Forest in memory of your loved one.
Funeral services provided by:
Evergreen Memorial Gardens Funeral Chapel
MAKE A DONATION
MEMORIES & CONDOLENCES
2 Entries
Thank You for the informative and valuable conversations. I've never cared for a better versed friend.
Brandi Pelagalli
February 13, 2015
My sympathy and caring thoughts to Jean's family.

Jean was a true personal friend and of course devoted to her church, her community, nature, along with the the Women's Club, Democratic Party, and organizations -- too many to name.

She loved games, esp. Bridge; and, never hesitated to become a part of any social group. There was no end to her interests!