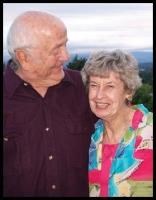 Jean Marie Boughner was born Aug. 28, 1926 to Albert E. and Amy Frosdick Boughner in Richville, NY.
Jean was the valedictorian of the Class of 1944, Gouverneur High School, Gouverneur, NY. She graduated with a Bachelor of Science from Cornell University, Ithaca, NY in 1948.
While at Cornell, she met Chess Getsinger. They were married June 19, 1948 in Gouverneur and immediately moved to Massena, NY where Chess began his career with the Aluminum Company of America (ALCOA).
In addition to being a full-time mother, Jean was a Cub Scout Den Mother, active in PTA, and a little league and hockey mom. She also volunteered in many roles at St. John’s Episcopal Church, including Altar Guild and manager of the Thrift Shop.
In 1973, Chess was transferred to ALCOA’s Vancouver Operations and Jean greatly expanded her volunteer activities. She served on St. Luke’s Episcopal Church Altar Guild and as a member of the Pastoral calling community visiting members of St. Luke’s congregation who were sick or shut-in. She was a reading volunteer for many years with Help One Student to Succeed (HOSTS) at Lincoln and Hough elementary schools. She volunteered one day a week for 30 years at Memorial Hospital and then SW Washington (PeaceHealth) Hospital. She also volunteered at the Washington State School for the Blind and Elahan Mental Health Services.
She and Chess enjoyed many recreational activities together including road trips back to northern New York, golfing, canoeing, cross country skiing, hiking and wildlife viewing especially at Ridgefield Refuge. In their younger days, they also enjoyed (and taught their children to enjoy) swimming, waterskiing, ice skating, vacations in the Adirondack Mountains, car trips to cities and historical sites, and a myriad of fun family activities. They also enjoyed hosting family at their cabin at Northwoods on Swift Reservoir.
She was predeceased by her husband of 70 years, Chess (2018); and sisters, Joanne Sheehan (1994) and Jane Kelley (2009).
She is survived by her three sons and their spouses, Steve (Catharine Keane) of Vancouver, Bruce (Christine) of Franklin, PA and Eric (Siege) of Seattle, WA; five grandchildren and four, soon-to-be-five, great-grandchildren.
A private memorial service will be held at St. Luke’s Episcopal Church in the near future. In lieu of flowers, memorial gifts may be made in her name to St. Luke’s Memorial Fund.
Please share a memory @ www.columbian.com/obits

Published by The Columbian on Sep. 27, 2020.
To plant trees in memory, please visit the Sympathy Store.
MEMORIAL EVENTS
To offer your sympathy during this difficult time, you can now have memorial trees planted in a National Forest in memory of your loved one.
Funeral services provided by:
Davies Cremation & Burial Services | Cremation Vancouver WA
MAKE A DONATION
MEMORIES & CONDOLENCES
2 Entries
I am so sorry for the loss of your loved one. May the God of peace and comfort be with the family during this most difficult time.
September 29, 2020
I got to know Jean and Chess when I attended St. Luke's Episcopal Church here in Vancouver. Jean was a smart, well-spoken gal who ran the Flowers Ministry, among others, for many years -- a terrific organizer. I liked her style, too. I learned a lot more about her from today's obituary, and was not surprised to see that she was the valedictorian of her high school class and that she had a Bachelor of Science from Cornell. Like I said, a smart gal.
I always enjoyed talking to Jean and Chess; Chess and I were from the Pittsburgh area, so we had often shared Western Pennsylvania slang for a laugh. ("Yins goin' somewhere? Did you red up your room yet?") Wonderful people. They were also two of the few people who followed up with me after I left the church, and I have always been grateful for that.
I am sorry that I missed Chess' funeral, as I didn't know about it until later, and I am sorry that I can't be at Jean's because of Covid-19. So I want to tell the Getsinger family that your parents were two of the nicest, friendliest, funniest and dearest people I have ever known. I have cherished memories of my time at St. Luke's because of them. My condolences to all of you.
Claire Johnston
Friend
September 27, 2020
Showing 1 - 2 of 2 results