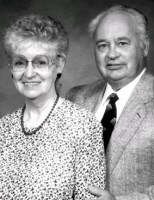 Horton Hackler of Vancouver, WA, passed away on July 24, 2010 at the Ray Hickey Hospice House. He was born in Wapinitia, OR to Doris Hackler. Horton received his GED and worked as an apprentice pipe fitter at Puget Sound Naval Shipyard in Bremmerton, WA.
He served in the U.S. Marine Corps as a Private 1st Class.
"Our dad liked helping people, hunting, and volunteered
many years for the develop mentally disabled.
He was an excellent conversationalist on many topics."
Special thanks to all the people that worked for the SW Hospice and all the people who worked at the Ray Hickey Hospice House, including the doctors who have had him as a patient.
Horton is survived by his wife of 60+ years, Juanita; daughter, Glena Smith of Dayton, OR, Linda Lehman of Treasure Island, FL, and Gail Winter of Chula Vista, CA; son, Dale Hackler of Seattle, WA; seven grandchildren; and nine great-grandchildren; three sisters, Darlene Montgomery, Ginger Curran, and Toni Chittenden.
He was preceded in death by his mother, Doris Chittenden; and sister, Connie.
A private service with family only is being planned.
Memorial contributions may be sent to SW WA Hospice or Ray Hickey Hospice House.
Please sign Horton's guest book at: www.columbian.com/obits.

Published by The Columbian on Jul. 29, 2010.
To plant trees in memory, please visit our Sympathy Store.
MEMORIAL EVENTS
To offer your sympathy during this difficult time, you can now have memorial trees planted in a National Forest in memory of your loved one.
Funeral services provided by:
Evergreen Memorial Gardens Funeral Chapel
MAKE A DONATION
MEMORIES & CONDOLENCES
4 Entries
We all miss you. Can't believe it has been over a month.