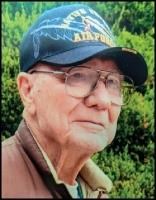 Hillery Aloysius “Rankin” Brown, loving husband and father of four children, passed away April 18, 2021, in Vancouver, WA. Rankin was born Dec. 21, 1921, in Browning, MT, to Marie Helen Paisley and Joseph A. Brown. He was a member of the Blackfeet Indian Nation and attended the local schools in Browning. He proudly served in the United States Air Corp from 1942 1945 and was a veteran of WW II. He served in California, Hawaii and New Guinea. In August, 1946, he married Elizabeth (Betty) Mae Nelson and they were married for 59 years until her death in 2005. Rankin retired from the Bureau of Indian Affairs where he was affiliated with the Federal Criminal branch early in his career and later was the Equal Employment Opportunity Officer for the Northwest Region traveling to reservations throughout Montana, Washington, Oregon and Alaska prior to his retirement. He was a Blackfeet Tribal Officer for many years in several capacities. He is survived by two sons, Everett (Marsha) Brown and Edward (Brenda) Brown; and daughter, Eddi (J.P.) Morgan; and many grandchildren and great-grandchildren. He was preceded in death by his wife, Betty; son, Earl Brown; and brothers, Curtis Brown and George (Kell) Brown. Golf was one of Rankin’s passions and he played every day that he could after his retirement. He and Betty enjoyed their affiliation with the Royal Oaks Golf & Country Club in Vancouver for many years. Rankin served in several leadership positions for the Club, as well. He was able to continue playing golf until just a few years prior to his passing. He and Betty also enjoyed playing bridge and they were often seen on the dance floor together. He had many friends in the Vancouver area and he loved traveling with some of them and playing golf. He enjoyed a good joke and often had one to share. He loved the Lord and practiced his faith as a regular at The Church of the Little Flower in Browning and St. Joseph Catholic Church in Vancouver for many years. A private family interment will be held at a later date in Ronan, MT.
Please share a memory @ www.columbian.com/obits

To plant trees in memory, please visit our Sympathy Store.
Published by The Columbian on Jun. 6, 2021.
MEMORIAL EVENTS
No memorial events are currently scheduled.
To offer your sympathy during this difficult time, you can now have memorial trees planted in a National Forest in memory of your loved one.
MAKE A DONATION
MEMORIES & CONDOLENCES
1 Entry
He was a great man, I thought about him and grandma all the time. We lost contact a very long time ago. He will be missed. Jennifer AKA Brown, Earls daughter.
Jennifer Permann
Family
July 24, 2021
Showing 1 - 1 of 1 results