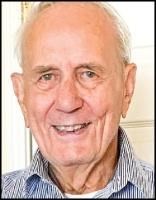 Hal went to be with his Lord and Savior Jesus Christ Sept. 23, 2021, following hospitalization at Peace Health in Vancouver, WA. He was born Jan. 18, 1928, in Warren, AR, to Roy and Kay Barnes and lived there until age 15, when the family moved to Concord, CA. Hal attended Mt. Diablo High School in Concord, where he was an accomplished athlete. At school he met a young woman named Bette Snyder. They began dating and were married May 15, 1948.
Hal was a very hard worker and had multiple jobs when his children were younger, including landscaping, rototilling, and work at a filling station. Later, Hal began working for a Shell Chemical fertilizer plant in Martinez, CA, as a machinist and then as foreman. While with Shell, he was transferred to St. Helens, OR, and then to Marietta, OH. After Ohio, Hal returned to the St. Helens plant where he retired as a purchasing agent at age 65.
Hal and Bette were both Christians and were very active in churches they joined, including the First Presbyterian Church in Concord, and the Evangelical Free Church also in Concord. In St. Helens, the family attended Grace Baptist Church where Hal was a deacon. After his retirement, Hal and Bette attended Cedar Mill Bible Church in Beaverton, OR. Hal was active in whatever church he joined, singing in the choir, serving as a greeter, teaching Sunday School, and serving on various committees.
Hal was exceptionally talented with his hands and could build or fix almost anything, much to the benefit of his children when they were married and had their own households.
After retirement, Hal and Bette lived in the Rock Creek area of SW Portland and later in Salmon Creek, WA. They traveled often to Arizona, spending time in Peoria and Sun City West and for a time lived in the state. They had many friends there as well as in Oregon and Washington.
Hal was very active well into his eighties and enjoyed playing tennis, golf, and racquetball. He also volunteered regularly for Meals on Wheels.
Hal’s wife Bette passed away in 2011; she and Hal were married for 63 years. A few years after her death, he moved to an independent living apartment at Bonaventure Senior Living in Salmon Creek. Later he moved to Glenwood Senior Living Center in Vancouver, where he was living at the time of his death.
Hal is survived by his three children, Debbie (son-in-law Glenn), Cindy (son-in-law Rob), and Tim (daughter-in-law Vicki); by 8 grandchildren and 14 great-grandchildren; and by his loving friend Janice Van Rossen.
The family invites you to a memorial service at Evergreen Memorial Gardens (1101 NE 112th Avenue, Vancouver, Washington 98684) on October 15th at 12:30 p.m. Donations in remembrance of Hal may be made to Meals on Wheels at www.mowp.org.
Please share a memory @ www.columbian.com/obits