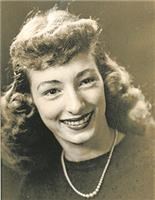 After a long battle with Alzheimer's, Gloria Jacobsen passed away on Jan. 12, 2016. Gloria was 83, but she loved to joke that she was only 21. Those who knew her dearest, knew her as "Babe".
Babe was born in Rockford, IL, Sept. 18, 1932, to Dewey and Elva "Dolly" McEllrath. Her parents, five children and their dog, all moved to Vancouver, WA in 1943.
Babe worked at the Marina in Camas, WA and also at Summit Mirror and Glass company before retiring in 1999.
She was a member of Moose Lodge for many years, attending Moose dances and the Moose races.
Her favorite hobbies were dancing, camping with her family, walking the mall, and interior designing. Babe refinished furniture way before it became popular. She loved her long visits with her sister-in-law, Rose, cracking jokes and laughing. She was an avid reader who loved Danielle Steele novels. Babe also loved listening to her favorite performers, Dean Martin and John Denver, Snicker bars, and her beloved red Jeeps!
Babe leaves behind four children, Gary Christensen, Laura Wenrick, Debbie (Eric) Amundson and Carrie Kennedy; six grandchildren, Stacey Reid, Jennifer Fischer, Katie Wenrick, Ashley Kennedy, Sara Schleske and Quinn Kennedy; six great-grandchildren, Alyssa, Sydnee, Chase, Alana, Anela and Boston; and her brother, Harry (Nancy) McEllrath.
Special thanks to her granddaughter, Katie Wenrick, for her loving care the last eight years.
Her service will be held Mon., Jan. 18, 2016 at Evergreen Memorial Funeral Chapel at 12:30 p.m. A Celebration of Life get-together will be held afterwards at Tapped Brew House, 2005 SE 192nd Ave., Vancouver, WA.
The family asks that in lieu of contributing to the service, to donate to the Alzheimer's Foundation of America Organization http://www.alzfdn.org in Gloria's name.
Please sign her guest book at: www.columbian.com/obits.

Published by The Columbian on Jan. 15, 2016.
To plant trees in memory, please visit the Sympathy Store.
MEMORIAL EVENTS
To offer your sympathy during this difficult time, you can now have memorial trees planted in a National Forest in memory of your loved one.
Funeral services provided by:
Evergreen Memorial Gardens Funeral Chapel
MAKE A DONATION
MEMORIES & CONDOLENCES
1 Entry
Rest in peace sweet lady.
Janet Barnes-Steinmueller
January 19, 2016
Showing 1 - 1 of 1 results