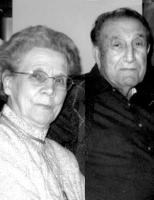 George Joseph Dodaro died January 25 in Seattle. He and his wife Mary (Rensvold) Dodaro lived in Vancouver, WA for 43 years. George grew up in Havre, MT and started working with his father on the railroad in his teens. He served in the US Army Air Force during World War II. In 1947 he married Mary Rensvold, and they had two children. He is survived by his son, Gerald Michael and daughter-in-law, Diane Lynne Althaus. George was an avid fly fisherman and in his later years a golfer. His employment with the Burlington Northern Railroad took him and his family from Havre, MT to St. Paul, MN, Klamath Falls, OR, and finally to Vancouver, WA where he retired 1984. George and Mary would have celebrated 68 years of marriage on February 10. They were members of Messiah Lutheran Church and now are together with their daughter Bonnie Jean in the church triumphant.
Please sign George's Guest Book at www.columbian.com/obits.
Published by The Columbian on Feb. 4, 2015.
To plant trees in memory, please visit the Sympathy Store.
MEMORIAL EVENTS
To offer your sympathy during this difficult time, you can now have memorial trees planted in a National Forest in memory of your loved one.
MAKE A DONATION
MEMORIES & CONDOLENCES
5 Entries
It's amazing how fast time goes by and yet it seems like yesterday we had the chance to spend time with our parents. God Bless our Mom's and Dad's. They will never be forgotten. Love you George.
Bob Rensvold
February 1, 2021
We are so sorry for the loss of your Mom and Dad. They were such wonderful people. They will be greatly missed. Our thoughts and prayers are with you. God Bless You.
Bob Rensvold
February 8, 2015
Sending love and prayers and your loss of dear George. He blessed us with very happy memories and set a glowing example of what kind of a life God would want us to live. Love Rick & Rena Hagen
February 6, 2015
Now Mom & Dad can rest in peace with Bonnie. We're thinking of you now Mike & Diane.
Ben Rensvold
Ben Rensvold
February 5, 2015
So sorry to see you have lost your dad. He is in a better place now & with your mom and Bonnie. My thoughts are with you. Sandy (Rensvold) Theroux
Sandy Theroux
February 5, 2015
Showing 1 - 5 of 5 results