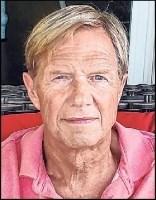 Frederick James Mayhew, known to his family and friends as Jim, passed away peacefully with family at his side in Summerville, SC, Sept. 19, 2021 after a brief battle with cancer. Jim fulfilled a dream of his when he retired last year and moved to South Carolina to live on a golf course. Jim was born Jan. 14, 1953 in Canton, NY, to Karl and Bette Mayhew. Jim graduated from St. Lawrence University in upstate New York in 1976. After a slight detour through the oil fields of Wyoming and the ski slopes in Park City, UT, Jim eventually attended and graduated from Lewis and Clark Law School in Portland in 1989.
From then on, Jim settled in Vancouver and began his work as a lawyer, a career that spanned 30 years. On the way, Jim helped hundreds of clients deal with their legal problems in a caring and thoughtful way. Jim worked hard at maintaining his solo practice, all the while making sure he enjoyed himself and making time for those he loved. Jim’s sense of humor and laugh were two of his most memorable and endearing traits. His story telling abilities were without match. Jim was known to work a roomful of people with his stories and sense of humor in such a way no matter who you were, you were most definitely entertained. Besides a good bottle of Scotch, Jim loved to play golf. Let’s just say his taste for fine scotch exceeded his abilities on the golf course. That never mattered to Jim, as the fun was just being with the fellas. Jim enjoyed watching sports, especially hockey, and you would never see or hear from him during the Stanley Cup playoffs.
Jim is survived by his wife of 24 years Sharon; his daughter, Amanda Ballentine; his sisters, Stella Ardire and Beth Mayhew; his brother, Karl Mayhew; his grandchildren, Callum, Hazel, and Julia Ballentine; and many nieces and nephews that loved him dearly.
The world lost a good one that day. Jim touched many lives in many ways, and we are all better for having spent time with Jim, albeit too short.
Jim’s family will be remembering and sharing stories about Jim at a memorial service to be held at Royal Oaks Country Club, in Vancouver on Oct. 13, 2021 at 2:00 p.m. Friends are invited to stop by and share your memories with the family.
Please share a memory @ www.columbian.com/obits