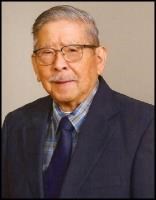 Frank Shizuo was born on Aug. 31, 1931 in Thomas (Auburn), WA. He was the fourth child born to Morito and Shizuka Nishimoto.
Frank served in the US Air Force from 1954 to 1958, including two years overseas duty in Tokyo, Japan, in the typhoon warning section. This sparked his interest in meteorology, and he proceeded to receive his degree in Atmospheric Sciences from the University of Washington in 1963. He began work at the National Weather Service office in Seattle in 1962, and progressed to forecaster and later to Lead Forecaster after transferring to the Portland office in 1967. He was often interviewed by the local media to describe extreme weather events to the public. He retired from the Weather Service in 1989.
During WWII, his family was interned by the US Government at various relocation camps on the west coast, including Tule Lake, CA, and Minidoka, ID. They later moved back to Auburn.
After his retirement, he enjoyed traveling the world with friends and family, volunteering for senior’s tax assistance, and pursuing his hobbies of gardening, golfing, bowling, and reading.
Frank is survived by his wife of 59 years, Irene; and their children, Terry (Yong), Michael (Lisa), and Patti; grandchildren, Aleesa, Andrew, Gemma, and Ryo. He is also survived by two sisters, Kiyoko and Karen; and numerous nieces and nephews. He was preceded in death by sisters, Dot and Tomi; and brothers, Yoshie and Ben.
Memorial Services will be held at Evergreen Memorial Gardens Funeral Home, 1101 NE 112th Ave, Vancouver, WA on Saturday, Oct. 2, at 12:30 p.m.
Please share a memory @ www.columbian.com/obits