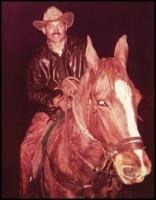 Our Cowboy Hero, Dr. Everett Ellis Heindselman, DVM, age 88, took his final Earthly ride June 1, 2021. He passed away at his home Okanogan WA, surrounded by his family and Dorothy, his wife of nearly 67 years. He is now reunited with his favorite horse Pride and is surely saddled up moving cows.
Ell was born Jan. 27, 1933 in Vera, OK, to William Ross and Clara Wachtman Heindselman. The sixth of seven children, he began learning his tremendous work ethic at an early age on the family farm. At the age of three, his family moved to Collins, WA, after the Oklahoma farm crop was decimated by grasshoppers.
At Puyallup High School, he met the love of his life, Dorothy Laing, the baby sister of his best friend Buzz. In 1952, he enlisted in the Army Airborne, making 54 jumps during his enlistment. Stationed in Tennessee, he drove across the country back to Washington to marry Dorothy Sept. 4, 1954.
Upon returning to Washington from Tennessee, their son Douglas Lee was born in 1955. A lifelong animal lover, Ell decided to pursue his dream of becoming a veterinarian and enrolled at Washington State University in Pullman in 1956. Go Cougs.
In 1960, son Richard Kirk was born. Upon graduation in 1962, he accepted a position at a veterinarian clinic in Washougal Washington and began earning the name that followed him the rest of his life, Doc Heindselman.
He soon started his own practice in Washougal, Orchard Hills Veterinary Clinic. The family grew by two during these years, with William Brent arriving in 1964 and Kory Reed in 1967.
In 1976, he moved the family to Okanogan, to pursue his other lifelong dream, being a rancher veterinarian.
He served the animal community in the Okanogan Valley for 30 plus years. During these years, Doc and Dorothy were heavily involved with the Cattlemen and Cattlewomen Associations, with Doc serving as county president, as well as serving on numerous committees at the state level and attending several national conventions around the country.
Family was everything to him, and he was the family foundation as Dad, Grandpa, Great Grandpa, Grandpa Doc, or Uncle Ellis. He relished the role, sharing his wisdom, love and caring hugs with so many.
An avid outdoorsman, he hunted, fished, camped and spent time outside whenever he could, but we all knew he was happiest saddled up atop a horse. That’s when those amazing blue eyes twinkled the most.
He is survived by his wife, Dorothy; his four children, Doug (Jana), Kirk, Brent (Jennifer), and Kory (Gay); his grandchildren, Josh, Melissa Valdez (Albert), Dustin (Megan), Cody, Jake, Jeb (Ashley), Demi Jo Martin (Jordan), Quincee (Dyllon), Josie (Enver), Dallas, and Hannah; great grandchildren Ryan, Lane, Alan, Ellsie, Maisie, Skylyn and Kiara. He was preceded in death by his parents, four brothers and a sister.
Services for Dad will be June 19, 2021, with a graveside service for family at 11 a.m. at the Spring Coulee Family Cemetery, followed by a Celebration of Life for all at 1 p.m. at Kory and Gay’s home, 47 Windy Hill Rd, Okanogan WA 98840.
We would like to invite anyone who has a brand to bring their branding iron to the 1 p.m. service. We will have a Branding Board, and request that you burn your brand to honor Doc Heindselman. The service will be outside so please be weather conscious, as well as COVID conscious. There will be a viewing Friday, June 18, from 4-8 p.m. at Precht-Harrison-Nearents Chapel in Okanogan.
Memorial donations may be made to Okanogan County Cattlemen/Cattlewomen Association, Scholarship Fund, at POB 683, Nespelem WA 99155.
Please share a memory @ www.columbian.com/obits

To plant trees in memory, please visit our Sympathy Store.
Published by The Columbian on Jun. 9, 2021.
MEMORIAL EVENTS
Jun
18
Viewing
4:00p.m. - 8:00p.m.
Precht-Harrison-Nearents Chapel
2547 Elmway, Okanogan, WA
Jun
19
Celebration of Life
1:00p.m.
Kory and Gay’s home
47 Windy Hill Rd, Okanogan, WA
Jun
19
Graveside service
11:00a.m.
Spring Coulee Family Cemetery
, WA
Funeral services provided by:
Precht-Harrison-Nearents Chapel
MAKE A DONATION
MEMORIES & CONDOLENCES
3 Entries
Doc Heindselman Was a wonderful veterinarian and man. I first met him in 1967When I married Tom Huffman of Washougal. Doc H. would go the extra mile to do his job. I remember a late after hours house call to pick up our cat and take him to the clinic. There were other acts of kindness, but that one really stayed with me.
Debbie Huffman
Friend
June 16, 2021
It was so nice to know Ell and his family when they lived in Washougal when he started his practice.
He made a lasting impression for good things
Dr Alvord Johnson (Washougal)
Al Johnson n
June 11, 2021
Kirk, Brent,Doug, Kory and Jana,,
May the love of friends and family help guide you all through the heartache and ease the sorrow during this difficult time. Losing a parent is one of the hardest things we will ever face. Your father left a HUGE footprint, so be proud of what he instilled in not only yourselves, but the many he came in contact with. Keep all of your wonderful memories of him close to your heart and speak of him often.
Sending peace to all,
Shelley Craig
Shelley Craig
Friend
June 9, 2021
Showing 1 - 3 of 3 results