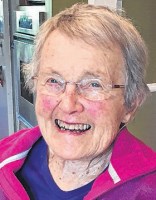 Doris Jane Brooking, known as Dory, died at her Camas/Vancouver, WA home on Saturday, August 26, 2017 surrounded by her seven surviving children.
Dory was born in Portland, OR on June 1,1923 to Frank and Doris Reed. She graduated from Grant High School and Oregon State College.
In 1944, Dory married Dr. Emil "Brook" Brooking before he went overseas as a captain in the U.S. Army Medical Corps.
After the war, Dory and Brook settled in Camas and together they raised eight children.
Dory was preceded in death by her husband, Brook; and daughter, Connie Durkee (Steve).
She is survived by her children: Barbie, Lindy, Cathy (Pete Sallee), Andy (Betty), Peggy, John (Cheryl), and Ann; fourteen grandchildren; nine great-grandchildren; and multiple nieces and nephews.
A memorial service for Dory will be announced in the near future through Brown's Funeral Home: www.brownsfh.com.
Donations in Dory's memory may be made to The Columbia Land Trust or Peace Health Southwest Hospice and Homecare.
Please sign her guest book at www.columbian.com/obits.

Published by The Columbian on Sep. 3, 2017.
To plant trees in memory, please visit the Sympathy Store.
MEMORIAL EVENTS
To offer your sympathy during this difficult time, you can now have memorial trees planted in a National Forest in memory of your loved one.
Funeral services provided by:
Brown's Funeral Home
MAKE A DONATION
MEMORIES & CONDOLENCES
4 Entries
My deepest sympathies to you all and celebrations also for the kind of person she was. Dori was adamantly kind to me - Come, see the view! Come, walk with me on this path! Come, hear my laughter and share my wealth and let my joy wash over you! I will miss her lively and generous spirit. I'll never forget her and if I can honor her in any way, let it be this: I will invite people to Come, with me! and share in the things I love.
Lindsay Cornelius
October 3, 2017
So sad to hear the news. But no one is gone as long as they live in our hearts and memories, so you can be assured "Mrs. Brooking" will live for many many more years. River fire pit, building the ponds, All the Fun at the house on pill hill. And Dory was a leader of the pack. I think she was the first person to serve me vegetables I didn't recognize and made me eat them.
Robbie Harris
September 6, 2017
Condolences to Barbie Lindy Cathy Andy Peggy John Ann and extended family. In memory of Brook and Connie.

Respectfully,
Kenny and Danny Cochran
Kenny and Danny
September 5, 2017
Barbie, Lindy, Cathy, Andy, Peggy, John and Ann,
My deepest sympathies to you all and your families. I've known Dorie all my life as our families were intertwined. My mother was your live in nannie. The older girls babysat my sisters and I and I went to school with some of you. Your dad was my doctor. Our first dog was a springer spaniel from your Speckles and Freckles. I so enjoyed seeing Dorie over the years at the Downtown Camas Pnat FAir, The holiday bazaars and other gatherings. She was a fantastic woman, wonderful mother, grandmother and great grandmother. Everyone knows how much she loved her family and Brook. They are now together for ever. She will be greatly missed.
Cathy
Cathy Hancock
Friend
September 1, 2017
Showing 1 - 4 of 4 results