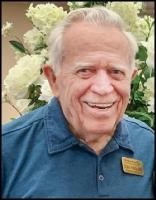 Longtime Vancouver resident Don Yingling died unexpectedly in the early morning hours of Oct. 23, 2021. Don and his twin sister Dolores were born in Tacoma, but raised and educated in Yakima.
Don lived a full and meaningful life of more than 90 years. He modeled the virtues of hard work and selfless service to his country, family, friends and community. After graduation from Yakima High School, Don enlisted in the US Air Force where he served 32 years. He was a veteran of both the Korean and Vietnam Wars. After retiring from military service as a Senior Master Sergeant, he and his first wife, Janice, and their four children eventually settled in Vancouver where Don had a varied and interesting career.
He worked for AMF selling bowling equipment. He briefly owned and operated a bowling alley in Port Townsend. He was a store manager for Mervyn’s. He sold cabinets for DeWils Fine Cabinetry. He bought and sold local real estate.
Once fully retired, Don volunteered through AARP to prepare income taxes for others. He became involved in city governance, running for a seat on the Vancouver City Council and working on various City Council campaigns. He was a devoted father and husband.
Don was predeceased by his first wife, Janice; by his sister, Dolores; and his brother, Richard; by his eldest son, Terry; and his son-in-law, Frank. He is survived by his daughter-in-law, Sue; his daughters, Sharon and Debra; his son, Neil; and daughter-in-law, Christie. He also is survived by his second wife, Betty; and her daughter, Margie; and son-in-law, Tom; and her son, Roy. He has six grandchildren, 21 great grandchildren, and two great-great grandchildren.
A Celebration of Life for Don will be held at The Church of the Good Shepherd on the corner of Ellsworth and McGillivray in Vancouver on Sunday, Nov. 14 at 2 p.m. A reception will follow. Masks are required.
Please share a memory @ www.columbian.com/obits

Published by The Columbian on Nov. 13, 2021.
To plant trees in memory, please visit the Sympathy Store.
MEMORIAL EVENTS
Nov
14
Celebration of Life
2:00p.m.
The Church of the Good Shepherd
on the corner of Ellsworth and McGillivray, Vancouver, WA
MAKE A DONATION
MEMORIES & CONDOLENCES
3 Entries
We were very sad to learn of Don´s passing. Don was a neighbor of ours in Cascade Park. He was a very kind man, and always had a lot of stories to tell. We would continue to run into him at garage and estate sales, even after he moved, and it was like he never left our neighborhood. Still just as friendly and full of stories, always with a smile. We loved having him as a neighbor. He will be missed.
Karla and Steve Town
Friend
November 18, 2021
I was saddened to read of Don's passing. I got to know him when he was active in City of Vancouver politics. It didn't matter whether you were on the same side as he on issues. He was always kind and respectful. I hope his family is comforted by their many good memories of him. Judy
Judy Zeider
Work
November 14, 2021
I'm so sad to learn of Don's passing. I worked with him at Mervyns. He was such a nice guy. My condolences to the family. Julie
Julie Risto
Work
November 13, 2021
Showing 1 - 3 of 3 results