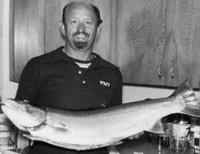 Don passed away Jan. 24, 2015 at Legacy Salmon Creek Hospital in Vancouver, WA. He was born July 3, 1937 to Dorothy and Walter Wendt. They lived in a logging camp near Cathlamet, WA. After Don's first year of school, the family moved to a farm near Battle Ground, WA. He played football, basketball, and baseball, and graduated from Battle Ground High School in 1955 with many good friends.
Don went on to Clark College where he played basketball, baseball and golf. He attended Linfield College where he also played football and got his Bachelors degree in Education.
After graduating from college in 1961, Don taught and coached at Ridgefield School District for four years. He then taught, was a counselor, and coached at Woodland School District for 26 years.
Don retired from education in 1990 but returned to coach Girls Golf in Woodland. During his retirement years he had a small business building custom golf clubs and taught golf lessons at his home.
Don loved to play golf, hunt, and fish. He loved knowing about, helping, and coaching kids. He was also hard working, cutting fire wood, pruning apple trees, and clearing berry vines.
Don is survived by his wife of 38 years, Ruth; daughters, Rikka Witham and Brita Wendt, both of Gresham, OR; two granddaughters; two great-grandchildren; sister, Jackie Lathrup; three nephews and a niece.
He was preceded in death by both parents; a brother-in-law, Jack Lathrup; and his cousin, Bob Wendt.
A Celebration of Life will be held at Woodland Presbyterian Church on Tues., Feb. 3, 2015 at 2:00 p.m.
Donations can be made to Klager Lilac Garden or the charity of your choice.
Please sign his guest book at: www.columbian.com/obits.

Published by The Columbian on Feb. 1, 2015.
To plant trees in memory, please visit the Sympathy Store.
MEMORIAL EVENTS
To offer your sympathy during this difficult time, you can now have memorial trees planted in a National Forest in memory of your loved one.
MAKE A DONATION
Please consider a donation as requested by the family.
MEMORIES & CONDOLENCES
13 Entries
i remember don's dry since of humor, I woud hit a golf ball in the trees and he would say"nive never tried playing the hole from there before interresting" He loved to do that im sure.
Eric liljedahl
Friend
January 26, 2019
Don and I met in 2009 at the Lewis River Golf Course, where he coached the Woodland Girls HS Golf team. He played there when he could, and I joined him occasionally, balanced with his expert service designing, constructing, and maintaining all kinds of golf clubs. My wife and I would visit to collect apple sticks for our bunnies from his and Ruth's apple orchard. I have the highest regard for Don as a consummate gentle man with a kind heart and a tender soul. You are missed sir, and may God hold you softly in the hollow of His Hand as you rest in peace.
Frank & Theresa Hoetker
February 26, 2015
Dear Ruth, Don was a great friend to my Don in so many ways..... and for so many years. He was a fine man and will be missed by many. My Love and Condolences, Debbie
February 11, 2015
I meet don about 1986 when I had to drive my golf team up to Lewis river from battle ground. We started a amazing friend ship. he coached my daughter, my brother, made all our kzg
clubs, ect,ect. The story's and exchanges of family and life I will miss. Don had a profound effect on my coaching at battle ground and I still use many of his drills and philosophy.
I give allot of my success to don.
My thoughts and prayers go out to the
family.
Eric Liljedahl
February 10, 2015
I was an classmate of Don's up to the fourth grade and we remained friends.
David Timmons
February 8, 2015
David Timmons
February 8, 2015
Brita and family, I am terribly sorry for your loss. please accept my sincerest condolences.
Doug Rollins
February 5, 2015
I new him both as a teacher and being a farmer. His folks and my folks were friends. He was a great person.
Linda Kennedy Grey
February 4, 2015
I was the High Secretary at Woodland High School for six years, from 1970 to 1976. Don was a friend, and I am sure he will be missed by many.
Louisa (Battershell) Thurber
February 4, 2015
I was in Don's first class and the first basketball team that he coached.He was a mentor, coach to me, and a all-time friend of the Kernan's. our thought's and prayer's are with Don and his family.
Eugene F. Kernan Jr.
February 3, 2015
I was a friend of his mother Dorothy and we use to go to the games to see Don and his team play. What fun! I didn't know Don that well but knowing his mother he would have to be a special person. I'm am sad the hear about his passing.
Nora Campbell
February 2, 2015
Knew Don when he was a coach @ Ridgefield and got to play golf with him several times in the last few years. He was a character back then, and still was till the end. Many golfers knew and loved him around the area, and I'm sure all had their stories about Don. And I'm sure "Don's girls" from the Woodland golf team will miss him, too. I know I will.
Gary Lawhead
February 1, 2015
Don was not only an athlete, but a leader in our class of 1955 at BGHS. At Clark College I especially remember him being on the basketball team. I was on the women's team which practiced before the men's. I was practicing making foul shots when Don walked in and watched me. After making 21 shots in a row Don started cheering for me and retrieved the ball after I made the shots. I got more and more nervous as he shouted for the other players to come and watch, but I did make 26 straight that day!! Don never forgot who his classmates were. He will also always be remembered.
Joyce Pietila O'Donnell
February 1, 2015
Showing 1 - 13 of 13 results