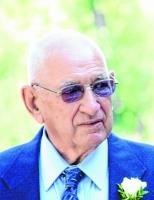 Donald Gene Scott passed away on September 2, 2017 at the age of 86. Don is survived by his wife Phyllis, of 59 years; his two children and their spouses; four grandchildren; seven great-grandchildren; and many extended family members.

After high school, Don served his country as a member of the 82nd Airborne Division (Army) before settling in Vancouver, WA in 1955.

Don retired from the City of Vancouver's Water Department for a brief period of time before returning to work for Cox Cable, Colf Construction and eventually started his own business, designing and installing in-ground sprinkler systems.

Don was a member of New Heights Church and Sons of Norway where he volunteered his time while developing many cherished friendships.

Please sign Donald's Guest Book at www.columbian.com/obits.
Published by The Columbian on Sep. 7, 2017.
To plant trees in memory, please visit the Sympathy Store.
MEMORIAL EVENTS
To offer your sympathy during this difficult time, you can now have memorial trees planted in a National Forest in memory of your loved one.
Funeral services provided by:
Evergreen Memorial Gardens Funeral Chapel
MAKE A DONATION
MEMORIES & CONDOLENCES
3 Entries
My condolences to the Scott family. May you find comfort in reading Matthew 5:4 in this time of sorrow.
September 8, 2017
Our deepest condolences to Don's family. Don became a friend when I worked for Colf Construction. I greatly enjoyed Don and will miss him.
Ervin & Leone Johnson
September 7, 2017
I will miss Don at the Sons of Norway pancake breakfast every month! He always made sure we were supplied with the wonderful blintzes and jam, the coffee cups were never empty!! He was a wonderful host, will miss him!
JoAnne Halbert
September 7, 2017
Showing 1 - 3 of 3 results