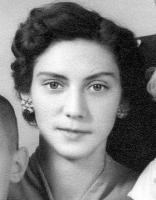 Dolores LaVonne Hamilton, died on Jan. 29, 2015. Matriarch of the West family, she was born on Aug. 17, 1928 in Red Willow, NE to Betty (Johnson) Feuerstein and Henry Feuerstein. She grew up in Cheyenne, WY. She had been a long term resident of Vancouver, WA.
While a child herself, Dolores was required to help care for her younger siblings. Her innate nature became one of self-sacrifice and a consummate desire to nurture and always place the needs of her family above her own. She did this with great love her entire life. She had fond memories of the childhood summers she spent on the family farm in Albin, WY.
Dolores' love was action incarnate,
always available to help without hesitation.
She lived a life of many challenges and hardships with great inner strength, dignity and unwavering faith which she instilled in her five children whom she raised virtually alone.
Widowed twice, Dolores first wed Roy West, "the love of my life". Thus began the travel adventures of an Army couple. Roy and Dolores had five children. Roy and son Roygene preceded her in death. Dolores later married Edwin Hamilton who loved and was loved by her children and grandchildren. Ed died in 1994.
Dolores was a staunch unyielding fighter on the side of right. A fierce competitor when playing backgammon, she was not the most gracious loser.
Among her talents and attributes were: wisdom, spiritual strength, natural abilities in managing personal finances (she could squeeze a penny into a dollar).
She had a beautiful voice and would often sing in her home. She loved to dance (tap, ballroom, square dancing).
She had been a natural shoe model with Cinderella feet.
Among her interests were: crocheting, square dancing, playing games with family members and family gatherings.
Common sayings of hers were: "coulda, shoulda, woulda" and to end disputes among her children, she would say "Kings X".
As she neared the end of her life, she was lovingly, and with great respect, cared for by her granddaughters, Wendy Olivera and Heather Corn.
Dolores is survived by her four sisters; and her children, Sharon Jacobs, Weldon West, Rebecca Lesher and Michael (Nancy) West. Dolores, "Nana", will be greatly missed by her 29 grandchildren; and 47 great-grandchildren.
Fly free sweet Butterfly! We will miss you
terribly Mama and love you more.
Services will be Sat., Feb. 7, 2015 at St. Johns the Evangelist Catholic Church, 8701 NE 119th St., Vancouver, WA. Rosary at 10:30 a.m., Funeral Mass at 11:00 a.m. Interment to follow at Evergreen Memorial Gardens.
Please sign her guest book at: www.columbian.com/obits.

Published by The Columbian on Feb. 4, 2015.
To plant trees in memory, please visit the Sympathy Store.
MEMORIAL EVENTS
To offer your sympathy during this difficult time, you can now have memorial trees planted in a National Forest in memory of your loved one.
Funeral services provided by:
Evergreen Memorial Gardens Funeral Chapel
MAKE A DONATION
MEMORIES & CONDOLENCES
10 Entries
Prayers to the family.
Jennifer Petra-Potter
February 10, 2015
What peace to know that you are now sharing God's loving embrace with our brother,Roland Buster and our beloved parents, Betty Faye and Weldon Buster who so loved and cared for us all.
Please give our brother,Mom and Dad a big hug and kiss. Rest. In peace.
Patricia Buster DeArmond Lori Buster Johnson DeFir Liita Buster Wanda Buster Mitchell
February 8, 2015
Nana, Nana-Banana and my Lil Tough cookie. Writing this just brings so much emotion to me. And knowing that you aren't here with me physically and tangibly is still utmost a shock. But at least I know you're here with me in mind heart and spirit baNANA. I will always remember how I used to try to scare you and play tricks on you when I was little. Especially when you'd call and I would change my voice to sound as Old N.Y. Jewish lady. It took ya twice until you knew it was me. Haha. I remember you'd ask me to draw pictures for you. You were a 'Heck of dancer' trying to keep up with you was almost impossible. "Where does Nana reserve all that dancing energy" I'd ask myself? When we would visit each other it was a must that we played Backgammon. You were absolutely a challenging opponent. I will be honest Nana...I cheated twice SORRY, I don't like losing either. LOL. When I was a child (in your eyes I always was) I loved story time. You were such a beautiful women/ Nana that any grandson could ever have, wish and ask for. You never forgot a Birthday. Thank you for being there for me always, I enjoyed talking with you, pouring glasses of wine, watching the 'Golden Girls' shows with you after my football practice and laughing with you. Now God has a beautiful butterfly to add to his garden. Rest In Peace Nana-Banana. I love you!
Love,
Your Christopher
February 6, 2015
Oh mama I miss you so much. Thank you for being the best mother and teaching me with your wisdom and giving me your strength. I will forever miss our daily calls and then our good night calls when you would ask me if I was in bed and end our conversation with good night baby girl and my little japanese souvenir followed by your nightly kiss. I will treasure those memories forever. Dance in heaven mama. I will forever miss you and love you more.
Your loving daughter,
Rebecca
February 5, 2015
Rest peacefully beautiful nana. I will miss you greatly, but will cherish all the wonderful memories with you. You were an extraordinary woman. Until we meet again...I love you always and forever.

Love
Joanna
Joanna West
February 5, 2015
Oh mama I miss you so much. You were the best mother. Thank you for your wisdom and strength. I will miss our daily 7:00 and goodnight calls with you ending the conversation with "good night my baby girl". I will treasure our talks always. I know you are in your glory now with God and dad. I love you mama and miss you more. Your loving daughter, Rebecca
February 5, 2015
Oh mama i miss you so much. Thank you for being the best mother ever and for your wisdom and teaching me to be strong. I will still talk to you every night at 7:00 and again when i get into bed for our good night talk and kiss. I would give anything if i could only hear you say good night my baby girl, my little japanese souvenir just one more time. You will always be with me and forever in my heart. I love you mama. your loving daughter Rebecca
February 5, 2015
Rest in peace my beloved nana, you were the strongest woman I've known and your selflessness and loving ways are to be admired! I will miss our date nights of good food, good wine and great conversation, I love you always and forever! Julie
Julie West
February 4, 2015
Mom,
I miss you so much already, my daily drives home from work will not be the same without talking with you. You have always been such a supportive loving mom and any and all success that I have been blessed with is a true reflection of how your raised me.

Thank you for all your love and guidance.
Nancy and I Love you so very much!

Your Son,
Michael
February 4, 2015
My Nana Sweetheart, I miss you so much already. You were a role model of strength and perseverance. Feisty to the end. I love you with all my hearts and stars. Fly free sweet butterfly.
Heather
February 4, 2015
Showing 1 - 10 of 10 results