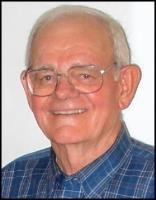 Dale Richard Browning, born to Wayne and Gladys Browning in 1930, died Aug. 24, 2021 of renal failure. Dale was a well-known physician in SE Portland for over 30 years. He received his undergraduate degree from University of Portland establishing a precedent followed by one daughter and a granddaughter, both choosing careers in the medical field.
Dale spent his early years with his sister Marchi (Rice) on a farm in the Midwest. The family eventually settled in The Dalles where he graduated from high school along with his sweetheart, Nevelle Bode. They married and set off on a life adventure that included five children: Daphne (Lee), Karren (Craig), Stephen, Linda (Al), and Allen (Denise). He enjoyed retirement at a cabin on the Lewis River near his favorite steelhead fishing spot. There he and Nevelle raised Tennessee Walker horses and tended to a huge perennial and vegetable garden for several years. It was a favorite gathering spot for large family functions. Theirs was a truly remarkable love story that survived the trials of medical school, internship, and establishing a practice while raising young children. They celebrated 73 years of marriage this year.
Dale had quite a competitive nature. One of the highlights of his life was winning the state football championship while at The Dalles High School in 1947. At one point he debated whether he wanted to be a physician or a football coach. Fortunately, for the community he served, he came up with a plan to enjoy both. He volunteered as team physician for the David Douglas Scots in SE Portland, never missing a home or away game, for 23 years. The wrestling team also benefited from his expertise as cauliflower ears got tended to as participants sought him out from other parts of the state. In more recent years he took up sporting clays shooting. True to form, he earned national ranking in his division and enjoyed the camaraderie it provided. Dale had a soft spot for the Oregon State Beavers, and was a Trailblazers season ticket holder for many years. All of that competitiveness rubbed off on his offspring who all pursued athletic endeavors of their own.
Professionally, Dale demonstrated leadership by serving as president of the Oregon Osteopathic Association and a term as Chief of Staff at Eastmoreland General Hospital. He was recognized as general practitioner of the year for the Oregon Osteopathic Association and was chairman of the Sports Medicine Committee before it was established as a specialty. Colleagues recognized his legacy of devotion to medicine by awarding him a Founders’ Emeritus award in 2005.
Dale and Nevelle thoroughly enjoyed their large and boisterous family at gatherings for Christmas, 4th of July, and endless birthday celebrations. The extended family now includes 11 grandchildren: Lisa (Bob), Amy, Sarah, Emily (Travis), Ehren, Evan (Kelli), Chad (Stephenie), Adam (Allison), Preston, Tristin (Nick), Trevor (Mikayla). In addition, there are 12 great-grandchildren: Will, Brooke, Grace, Harper, Bode, Nevellie, Allegra, Brynn, Isaac, Jeffrey, Davis, and Evelyn.
“Love doesn’t die, people do. So when all that’s left of me is love, give me away.” from Epitaph by Merrit Malloy
No service will be held at Dale’s request.
Please share a memory @ www.columbian.com/obits

Published by The Columbian on Sep. 26, 2021.
To plant trees in memory, please visit the Sympathy Store.
MEMORIAL EVENTS
To offer your sympathy during this difficult time, you can now have memorial trees planted in a National Forest in memory of your loved one.
MAKE A DONATION
MEMORIES & CONDOLENCES
3 Entries
Good Morning: My father was Dick Sutherland, coach of the 1947 state championship football team from The Dalles. While growing up in Bandon, I heard all of the stories about the championship team. I especially remember my dad talking about Dale Browning and what an important part he played in the championship season! Later I became a teacher and ended up at The Dalles High School. One of my extra-curricular duties was advisor to the National Honor Society. At one of the induction ceremonies, I read a list to the audience. of the many accomplishments of former members of the NHS and Dale Browning was one of those mentioned! Brought back many memories. Thanks, Ron Sutherland, The Dalles, OR.
Ron Sutherland
Other
September 27, 2021
What a class act he was. I always enjoyed our time together Howard
Howard Graitzer
Work
September 26, 2021
A very personable doctor who treated his patients with with care and concern. He delivered our daughter 54 years ago. Deepest condolences to his family.
Richard Cheney
September 26, 2021
Showing 1 - 3 of 3 results