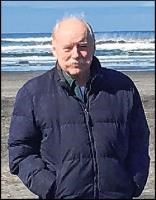 Lew, 78, passed away Nov. 1, at his Battle Ground Home of 41 years (or Grandpa’s park as his grandsons often referred to it.) He was born Aug. 23, 1943, to Charles and Maxine Snodgrass in Portland, OR, and grew up in Sunnyside, OR. He graduated from Clackamas High School.
Lew worked his entire career for Simpson Timber Company / Jeld-Wen door manufacturing. He began his career in an entry level position and worked his way up to General manager of the Vancouver plant at the Port of Vancouver. He met his wife Ruth in 1976, and were happily married 44 years. Later he was able to travel throughout the U.S. and Europe consulting many different factories improving their performance. He worked there until 2002 when he decided to return to his property in Battle Ground, WA, to work on projects and begin his frequent reporting on his Facebook page of the wildlife “happenings on 269th street” from his family room window.
If he wasn’t puttering in the yard, he could be found in his shop building his hot rods. He was a member and President of the Kamikazes Car Club. He built his 1931 Model A pickup from the ground up. In 2016 the Kamikazes Car Club entered the 60th Anniversary Portland Roadster Show with Lew being awarded Best in Class for his Model A.
Lew was a lifetime member and secretary for Clark Rifles. He was an avid shooter. You could find him on the range with family members and many friends.
He also enjoyed annual hunting trips with his sons, as well as fishing and clamming with family and friends.
Lew is survived by his wife, Ruth; three children, Ted (Kelli), Ben (Lisa), and Jennifer (Pete) Geloff; five grandchildren, Anthony (Melany), Aaliyah, Rylee, Spencer and Aiden; and one great-grandson, Torin; and many nieces and nephews.
A graveside service will held Sunday, Nov. 14, 2021, 1:00 p.m. at Mountain View Cemetery 38813 NE 119th Ave., Amboy, WA 98601.
The family would like to give a big thank you to Rod and Billie and special thanks to Community Home Health & Hospice.
In leiu of flowers memorial gifts may be made to this organization.
Please share a memory @ www.columbian.com/obits

Published by The Columbian on Nov. 7, 2021.
To plant trees in memory, please visit the Sympathy Store.
MEMORIAL EVENTS
Nov
14
Graveside service
1:00p.m.
Mountain View Cemetery
38813 NE 119th Ave., Amboy, WA
MAKE A DONATION
MEMORIES & CONDOLENCES
2 Entries
My sincere condolences in your time of sorrow , I will always remember Lews honesty and sincerity in the time I was privileged to associate with him while he was in Sheffield Uk
Roy Woosey
November 8, 2021
Sandy and I send our sincere condolences.
Paul Stephens
November 8, 2021
Showing 1 - 2 of 2 results