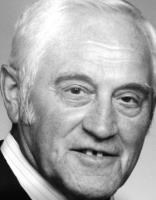 CHARLES "CHARLIE" JOHN CHARVAT
November 30, 1932 ~ December 28, 2015
" Charlie was a loving husband, father, and grandfather who will be missed dearly by his family and friends.
His warm smile and quick wit brought joy
to all who knew him."
Charlie was born in Kyje, Czechoslovakia. As a young man, he immigrated to Germany and enlisted in the U.S. Army, to which he dedicated 21 years of his life. During that time, he met his wife, Lieselotte and raised his family.
In 1979, after retiring from the Army, they moved to Vancouver, WA. He taught meat-cutting at Clark College for 27 years.
Charlie is survived by his daughter, Helen Hyde (Keith); grandson, Donald Hyde (Angi); and granddaughter, Laycee Hyde.
He was preceded in death by his wife, Lieselotte; and his son, Bernard.
Interment will be at Willamette National Cemetery on a date yet to be decided. Announcement will follow.
Please sign his guest book at: www.columbian.com./obits.
Published by The Columbian on Jan. 3, 2016.
To plant trees in memory, please visit the Sympathy Store.
MEMORIAL EVENTS
To offer your sympathy during this difficult time, you can now have memorial trees planted in a National Forest in memory of your loved one.
MAKE A DONATION
MEMORIES & CONDOLENCES
1 Entry
sweet Charlie!I miss you. My days are not at all the same without you here! My life was touched by your smile and love! So thankful for the past year with you, all our wonderful memories and fun trips! My favorite thing you ever said to me was, "you go, Charlie go!!!!" Thank you for your love and laughter and all the dances!!!!
I love you Charlie!
tammy wingate
January 3, 2016
Showing 1 - 1 of 1 results