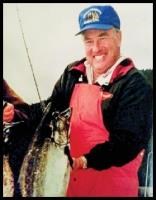 Bruce lived life to the fullest. Some say the richest person in the world is the one with the most memories. Bruce spent his lifetime making memories. When he could include friends to enjoy the moment, life became even better. He loved sharing his time with friends. It was not uncommon for him to be in a room full of people and hear his laughter bellowing out. His children often could not see his whereabouts though they knew where he was by hearing his laughter.
Bruce was an avid fisherman and outdoorsman. Oh, how he loved the great outdoors, living life to the fullest and having fun! People liked to be around him because he was interested in having a good time. He loved to tell stories, remembering everyone’s names as far back as childhood. He did not meet a stranger in life. His smile was ready to greet any passerby with genuine warmth and kindness. He made himself available to strike up a conversation at anytime with anyone in his personable manner. He may have received this trait from his mother, Annie Clemenhagen.
Bruce’s father, Joseph, moved to Uniontown, WA, with Bruce’s grandparents in 1903. From there, the Clemenhagen family homesteaded in 1906 on Big Bear Ridge where Bruce was born and raised by Joseph and Annie. Annie was of Swedish descent and she did her best to not have him learn profanity in her native language.
Settling down and establishing roots played a major role in Bruce’s life. He was married twice and was in a total of three relationships. Memories were recalled about his grandson playing with replications of the heavy equipment Bruce sold to loggers during his career. As a salesman ’receiving a good deal’ was important to Bruce. During that time he developed relationships that were nurtured to his final day some 55 years later. One friend recalls an annual fishing trip they took 22 years in a row. Bruce’s value of people, treating each person individually as if they were the whole world in that moment was phenomenal. The number of real and caring friends are many.
Bruce was with friends doing what he loved when he died. The family is very thankful to those friends. He was 79. Coincidentally, Bruce shares the same facts as his father: Died at age 79 from a suspected heart attack in the month of September. Also preceding him in death are his mother, brother, granddaughter, sister-in-law, brother-in-law, daughter-in-law, and beloved others.
While Bruce joins those beloved, his essence lives on. Bruce believed in treating people with kindness, fairness, and being helpful. We honor him by continuing those principles. Bruce is survived by his sister, children, grandchildren, great-grandchildren and cherished others.
Bruce’s children recall how he lovingly and tenaciously looked out for them. Also memorable to the children was his wise, gentle, and soft spoken nature.
The family would like to share from Bruce’s fisherman’s perspective ‘So long, thanks for all the fish.’ And from the man’s perspective he says ‘Bye everyone.’
Per Bruce’s request, no service is being held. Geez.
Please share a memory @ www.columbian.com/obits

To plant trees in memory, please visit our Sympathy Store.
Published by The Columbian on Oct. 4, 2020.
MEMORIAL EVENTS
No memorial events are currently scheduled.
To offer your sympathy during this difficult time, you can now have memorial trees planted in a National Forest in memory of your loved one.
MAKE A DONATION
MEMORIES & CONDOLENCES
2 Entries
When we first met Bruce in Arizona in 2003 and then discovered we lived only 20 miles apart in Washington we just new he was a special person and we wanted to keep in contact. He, over the years has been a very special friend! We will miss him very much and send our condolences to his family.
Gary & Sherry Goodman Morse
October 18, 2020
Bruce was the nicest man and he was a genuinely kind person. His love and friendship will be greatly missed by everyone who knew him.
Gordy and Jeannie Peck
Friend
October 4, 2020
Showing 1 - 2 of 2 results