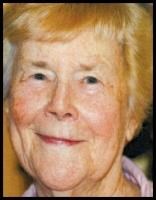 Betty M. Schuck Neff Balch passed away Sept. 4, 2019 in Vancouver, WA. She was born Oct. 9, 1925 in Durkee, OR to Blanche and Charles Schuck. Betty went to school in Baker, OR and graduated from Baker High School in 1943.
She completed Registered Nurses Training during WWII in the Cadet Nursing Program and graduated in 1946. If the war had continued, she would have enlisted in the U.S. Army as a 2nd Lieutenant. But as the war ended in 1945, she married William F. Neff in Oct. 1946.
Bill was in the U.S. Air Force so the family moved every 2-3 years, son Charles was born in 1947 in Tacoma, WA, daughter, Susan in 1949 in Riverside, CA, daughter Doris in 1952 in San Antonio, TX and son Bill Jr. in 1955 in Sacramento, CA.
In addition to her nursing credentials, Betty completed two Masters degrees and a Doctorate of Education at Montana Sate University. She designed, wrote and taught the Certified Nurses Aide Program for Montana State and oversaw the testing until she retired at age 73.
She also enjoyed traveling both in the US and internationally. She experienced new places, cultures and people each year with her husband, George.
Betty is survived by son, Charles Neff of Nashville, TN; daughter, Susan Neff of Vancouver, WA; sister, Grace Haskin of Fayetteville, GA; brother, Kenneth (Donna) Lanyon of Yamhill, OR; five grandchildren, Eric (Andrea Songey) Neff, Emily (Dave) Owen, Luke (Melissa) Neff, Matthew (Abby) Neff and Colin (Michelle) Neff; and 19 great-grandchildren.
She was preceded in death by her husband, George E. Balch Jr.; sister, Alene (Ed) Chadwick; brother, Fred Schuck; sister, Joan (Tom) Matlock; brother, Bud Lanyon; daughter, Doris A. Schell; son, William F. Neff Jr.; mother and stepfather, Blanche and Joseph Lanyon; and father, Charles Schuck (in 1930).
A memorial service was held Sept. 10, 2019 at Highgate Senior Living. The family wishes to thank the staff of Highgate - all of them from the administration, nursing, reception, bookkeeping, housekeeping, maintenance, caregivers - all of you who went the extra mile to give mom loving and tender care, who responded with a hug and ”I love you” to her, we know that there is a special place in Heaven for you all. And thank you for never acting as if the family’s requests were too much.
Betty’s ashes were interred next to her father in Baker City, OR. She will be deeply missed.
Please sign her guest book @ www.columbian.com/obits
To plant trees in memory, please visit our Sympathy Store.
Published by The Columbian on Sep. 29, 2019.
MEMORIAL EVENTS
No memorial events are currently scheduled.
To offer your sympathy during this difficult time, you can now have memorial trees planted in a National Forest in memory of your loved one.
MAKE A DONATION
MEMORIES & CONDOLENCES
3 Entries
I was Betty and George’s caregiver in AZ. I just found this as I was thinking of her. You are missed! Rest In Peace . Love- Kelli
Kelli
Friend
March 9, 2021
May she always be remembered. R.I.P Dr. Betty ❤
Michele Worrell-Ford
September 30, 2019
She will be missed so much, I loved her, giving her hugs. I truly enjoyed helped your mom.
Michele Worrell-Ford
September 30, 2019
Showing 1 - 3 of 3 results