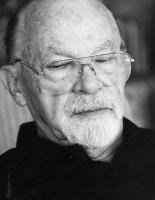 Benjamin Wiener was born in New York City on October 5, 1920. He was a first generation American and the youngest of 5 children. In many ways, his story was also the story of 20th Century America, stretching into the 21st. Speaking only Yiddish until he was 5 or 6, he entered the New York City public schools, bright enough to catch the attention of a teacher who asked if he had plans for college. The thought had never occurred to him but, as he would so many times afterwards, he seized the opportunity as it presented itself.
Ben was a part of the first graduating class of Queens College, going on to graduate studies in Chemistry at Columbia University. From there he was recruited to a new research project in Oak Ridge Tennessee; only later would its name, The Manhattan Project, be revealed. While proud of his role in ending WWII, Ben was among those scientists joining Scientists for Social Responsibility in recognition of the implications of the technology they had created.
His next pioneering accomplishments were in the pharmaceutical industry where he founded Zenith Laboratories, one of the first generic drug companies. Starting as a scrappy industry under constant attacks from the major pharmaceutical corporations, Ben helped lead the generic revolution that delivered life-saving drugs at a fraction of their previous cost, saving consumers billions of dollars. Before and after Zenith Labs, Ben worked with companies in over 50 countries and was honored as a "trailblazer" by the Generic Pharmaceutical Industry Association in 2004.
Beyond his professional adventures, Ben led a remarkably full life this short obituary cannot come close to detailing. Retirement did not sit well with him, so in 1992 he packed up a U-Haul truck and moved from New Jersey to Oregon, where he met his current wife Linda - a day he would say was his luckiest. Kindred spirits, they traveled the world and shared it together. To the last, he was a pioneer: after beating cancer he hit the front pages in 2012 as the first Oregonian to receive the collapsible Sapien heart valve - a ground-breaking procedure that will saved countless lives.
Benjamin Wiener died at home on December 31, 2014 at the age of 94. He is survived by his wife, Linda; children Mark and Beth; and grandchildren Tom, Sam, Jordan, Aoife and Caragh. He had a long, good run and the world is better for him having been in it.
Please sign Benjamin's Guest Book at www.columbian.com/obits.
Published by The Columbian on Jan. 11, 2015.
To plant trees in memory, please visit the Sympathy Store.
MEMORIAL EVENTS
To offer your sympathy during this difficult time, you can now have memorial trees planted in a National Forest in memory of your loved one.
MAKE A DONATION
MEMORIES & CONDOLENCES
5 Entries
As a young high school graduate my first "real job" was at Zenith Laboratories in Englewood NJ where I worked for Benjamin Weiner, his brother Ira and Bernard Bedrick. I knew working for him that he was special and I never forgot him all through my working life. I learned a lot about the drug industry from that job. How lucky was I to have started my working career with such a fabulous role model? He was a wonderful brilliant man that I never forgot all along my way.
Donna (Bruno) DeLong
Coworker
August 25, 2020
We are so saddened that our dear Uncle Ben passed. We have fond Memories of him at Passover Seders at our Grandparents' apartment. Our father, his brother Samuel Wiener, was very proud of him and told us about his great accomplishments. Our Sincere Condolences. Barry Wiener and Harriette Wiener Halperin.
Harriette Halperin
April 14, 2015
I was so saddened to read of Mr. Wiener's passing. It has been a long time since we were in touch but I will always remember him as a brilliant, charming and fascinating man, as well as a loving pet owner! My condolences to Linda and the rest of the family; our world is definitely a better place because he passed through it.
Liz Grauer, DVM
February 4, 2015
I am also an alumnus of Queens College and was a social acquaintance of Ben during those tumultuous war years. As a physician I reluctantly and finally acceptingly prescribed generic medication. Coincidently, I am also recipient of an Edwards-Sapien aortic valve. Please accept my condolences.
Jacob Rand
January 17, 2015
Dear Mark and Beth, I was very moved by the lovely obit of your lovely dad in todays paper. Your father and my father, Nick Cristantello were great friends since my dad moved to Portland from Roch. NY in 1991 and met your dad playing racquet ball in 1992. Nick often spoke of Ben and his admiration of him and how he enjoyed their friendship and mostly the fun sense of humor they shared and the good times and lots of laughs they had together. My sincerest condolences on your loss. May you find comfort in knowing that you and he were blessed with the gift of knowing that he did indeed have a long full life and a long good run. Sincerely, Myra Van Kerkhove
January 11, 2015
Showing 1 - 5 of 5 results