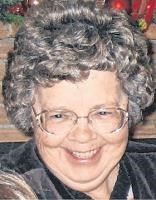 Born Avis Crow in Tacoma, WA, Avis met and married her husband of 48 years, Warren, there.
She lived in the Minnehaha neighborhood of Vancouver, WA for 60 years, where she was an active member of the Minnehaha Garden Club, joining it in 1961. Avis became a Master Gardener and Master Composter, sharing her knowledge with many others.
Avis was also an avid musician. She played the violin for 60 years, joining the Vancouver Orchestra (later Symphony) in its early years. In later life, when arthritis interfered with the violin, she taught herself the cello. She then joined the Vancouver Pops Orchestra, playing the cello with them for many years.
Avis worked 27 years for JC Penney, first at Lloyd Center, and then VanMall, retiring in 1990. She was an active member of the Community of Christ Church her entire adult life, attending the Ridgefield branch.
Avis was preceded in death by Warren and her son, Warren Jr "Jim".
She is survived by her daughter Julie, son-in-law Eric, and grandson Kristoffer, as well as many other loving relatives and friends.
Avis was a true character and will be so missed.
A Celebration of Life will be held at 3:00 p.m., Sunday, October 8, at Community of Christ Church, 400 NE 179th St., Ridgefield, WA.
Donations may be made in her name to Community of Christ Lewis River Campgrounds, 18334 NE Lucia Falls Rd., Yacolt, WA 98675.
Please sign her guest book at: www.columbian.com/obits.
To plant trees in memory, please visit our Sympathy Store.
Published by The Columbian on Sep. 17, 2017.
MEMORIAL EVENTS
No memorial events are currently scheduled.
To offer your sympathy during this difficult time, you can now have memorial trees planted in a National Forest in memory of your loved one.
MAKE A DONATION
MEMORIES & CONDOLENCES
4 Entries
Very very very funny lady. Avis never said a bad word about anybody. Her and I played in the Vancouver Symphony several years ago. She always had a smile on her face .... We'll miss her.
Gerry and Brenda Hofman
October 11, 2017
Avis was always a bright spot in every room. She was forever sharing about the highlights of her garden. She brought horticulture samples to every garden club meeting so we could see what she was excited about. She shared all her plants with all of us -- her choices in plants live with many of us in our yards. We have been and will continue to miss her at every meeting of the Minnehaha Garden Gate Club.
Linda Caton
October 3, 2017
Julie,
So sorry to hear of the passing of your mother. It is hard to have our moms leave us. I remember her BIG smile and hardy laugh. In the years since our childhood, in my teaching days,I would see her when she came to Sifton Elementary with her musician friends. It was always nice to see her again.
She can now rest in peace with the choirs of angels in heaven.

Prayers for your mom, you and your family.
Colleen Curtin Torrens
September 24, 2017
My deepest sympathy. Avis was a delightful, always smiling Garden Club member. She will be deeply missed. Joyce Lounsberry, Washington State Federation of Garden clubs President.
September 21, 2017
Showing 1 - 4 of 4 results