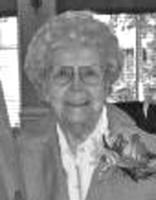 Adele Evangelyn Brabec, 100 years old, passed away on Mon., Jan. 4, 2016 in Vancouver, WA. She was born to Axel and Helena Gustafson on July 25, 1915 in Willmar, MN, where she graduated from Willmar High School.
Adele was a nurse at Anoka State Hospital before she married Edward "Bud" Brabec in 1938. She was a homemaker thereafter and together they raised three children, a son and two daughters.
Adele was active in the Girl Scout program, Hazel Dell Grange, served on the election board, and volunteered for various organizations in town. She earned her AA degree from Clark College in 1971.
Adele loved to travel and after the children left home, she and Bud traveled all over the United States and saw many wonderful things. One of the trips they liked to make frequently was to Door County, WI where they took in their famous Fish Bowl dinner. The highlight of Adele's travels was when she toured Europe and was able to visit her ancestral home in the Lofoten Islands of Norway where she was able to meet some of her Mother's relatives.
Adele will be missed by her husband of 77 years, Edward "Bud" Brabec; two daughters, Maureen (Larry) Drake of Longview, WA and Debbi Oslund of Vancouver, WA; six grandchildren, Robert (Dee Dee) Brabec, Scott (Melissa) Brabec, Robin (Hayden) Davis, Rick Drake, Eric (Bobbi) Oslund, and Chad (Yary) Oslund; 17 great-grandchildren, Robert "Bo", Sophie, Kyle, Amelia, Jake (Marissa), Corissa (Matt), Brady, Myles, Cassie, Kayleen, Keyonna, Austin, Ashlynn, Jesus M, Sophia, Zach, and Zoe; and three great- great-grandchildren, Aleigha, Theodore, and Piper.
She was preceded in death by her son, Wayne Edward Brabec.
A memorial service to celebrate Adele's life will be held Sat., Feb. 13, 2016 at First Church of God, 3300 NE 78th St., Vancouver, WA, at 12:00 noon, with reception immediately following.
Please sign her guest book at: www.columbian.com/obits.

Published by The Columbian on Jan. 10, 2016.
To plant trees in memory, please visit the Sympathy Store.
MEMORIAL EVENTS
To offer your sympathy during this difficult time, you can now have memorial trees planted in a National Forest in memory of your loved one.
Funeral services provided by:
Northwood Park Funeral Home, Cemetery & Mausoleum
MAKE A DONATION
MEMORIES & CONDOLENCES
3 Entries
My thoughts and prayers are with Adele's Family. She was a true Lady and I always enjoyed her company at meetings, dinners and other activities of Hazel Dell Grange.
Diane Wannamaker Tanner
January 26, 2016
You have my deepest sympathy, It is amazing that she lived such a long life, not many of us will have that opportunity, just think of the changes she must have seen during her lifetime. May the God of comfort be with you at this of sorrow. Psalm 90:10
January 12, 2016
Debbi, sending you prayers during this difficult time.
Hope Murray
January 10, 2016
Showing 1 - 3 of 3 results