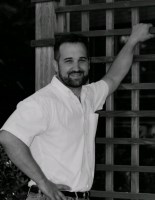 Adam Lee Ahola, 40, passed away at 5:15 a.m. on Monday, March 12, 2013, at his home in Carrolls, Washington with his family by his side. He battled cancer courageously for two years, never wavering from his dedication to Faith, Family, and Friends.
Adam was born October 5, 1972 to Mark and Linda Ahola of Brush Prairie, Washington. He spent all of his youth in Hockinson and graduated Prairie High School in 1991. He excelled at athletics where his 1990 football team won the League championship. He attended Clark College and Washington State University where he earned his Bachelor's degree in Civil Engineering and wrote political cartoons for the WSU Evergreen paper. He worked summers in Yellowstone National Park for the Federal Highway Administration and was hired full time upon graduation. As a project manager at the Vancouver Western Federal Lands Regional headquarters he designed roads in Yellowstone, Glacier, and Denali National Parks.
He met his future wife, Amy Rasmussen in engineering classes and they married August 17, 1997 in Spokane, Washington. They resided in Yellowstone Park for two years and returned to Washougal, WA where Grace Jessie Ahola was born in September of 2000 and Molly Dot arrived in June 2003. They moved to their new home overlooking the Columbia River in 2006 where Mac Alfred was born in July 2010.
Adam enjoyed hunting with his father, brother, cousins, and friends in Washington, Idaho, Montana, and Nevada. He enjoyed his family more than anything and enjoyed taking them to the beach, skiing, hiking, fishing, and exploring the Northwest. He especially loved fly-fishing in Yellowstone Park and the Ruby River in Montana.
Adam was an accomplished artist from a young age. He painted many hunting and fishing scenes and portraits of his children.
He became a member of the Seventh Day Adventist Church in Woodland where he served in their youth ministry and performed yard and grounds maintenance. He was baptized August 2012 at Cedar Creek and dedicated his life to serving Christ.
Adam is survived by his wife, Amy; children, Grace, Molly and Mac; parents, Mark and Linda (Wambach) Ahola; siblings, Angela Anthony (Michael) and Yvette Tuttle (Jim) and Brandon Ahola (Gidget); grandfather, Marion Wambach; mother- and father-in-law, Dot and Gary Rasmussen; and many loving aunts, uncles, cousins, and nieces and nephews.
A "Celebration of Life" memorial service will be held on Saturday, March 23 at 3:00 p.m. at Meadow Glade Seventh Day Adventist Church, 11001 Northeast 189th Street, Battle Ground. A private burial took place Friday, March 15 at Finn Hill Cemetery in Hockinson.
Arrangements were made by Layne's Funeral Home, Battle Ground.
In lieu of flowers, memorial gifts can be sent to International Children's Care, PO Box 820610, Vancouver, WA 98682.
Please sign his Guest Book at www.columbian.com/obits.
Published by The Columbian on Mar. 17, 2013.
To plant trees in memory, please visit the Sympathy Store.
MEMORIAL EVENTS
To offer your sympathy during this difficult time, you can now have memorial trees planted in a National Forest in memory of your loved one.
MAKE A DONATION
MEMORIES & CONDOLENCES
19 Entries
I miss you man.
Loren Hudziak
Friend
November 1, 2018
Our prayers are with Amy and Adam's family.
Dan and Karen Kaiser
March 25, 2013
Love from cousin Janell
March 23, 2013
Adam was an inspiration to his friends & church family! We miss him so much but are thankful to have known him. Our hearts & prayers go out to his precious family.
Carol & Gary Dodge
March 21, 2013
Amy we are very sorry for your loss of Adem. I hunted with him and his father Mark. Golfed with Mark. So sorry for your whole family. Roger & Linda Lindsley
Roger & Linda Lindsley
March 21, 2013
Adam Your light will always shine
March 19, 2013
So sorry for your loss, Ron and Leslie Davis
March 19, 2013
U will always be loved an missed Adam , u was a wonderful cousin and I will alway remember the good times when we was kids growing up .
Rachel Allen-wambach
March 19, 2013
Adam was an amazing student athlete and gifted artist at Prairie High School. The current mascot "Falcon" is a drawing Adam did for me, his athletic director, his senior year. Thoughts and prayers go out to the family and close friends at this loss.
Dennis Gillingham
March 19, 2013
Though I only knew Adam as a co-worker, he had a good heart and a kind soul and was much loved by family and friends. He will be missed.
Tori Brinkly
March 19, 2013
Please accept my sincere condolences.May you find comfort and the strength to cope.
Phoebe E
March 18, 2013
I only knew Adam for about 5 years, but enjoyed his positive and realistic outlook on life. I wish his family only the very best that life has to offer.
Pam Jordan-Wood
March 18, 2013
Adam, you will reside in our heart's forever. And you will be missed.
Jeff and Robyn Miller
March 18, 2013
Out love and prayers go to Adam's family. He was greatly loved by his church family and will be missed a lot. James, Pam, Jaime, and Daniel Bennett
March 17, 2013
Julie Gilland
March 17, 2013
Barbara Blaylock
March 17, 2013
Adam's dedication to his wonderful family will always be remembered. He was wonderfully talented. Praying comfort and peace to the entire family.
Miriam Silvernail
March 17, 2013
What wonderful memories I have of growing up with Adam. I can only imangine the amazing memories his family has. Hold these memories close to your heart now and in the future and he'll always be with you.
Aimee Ward
March 17, 2013
My thoughts and prayers are with the family and friends of Adam. I had the privilege to meet him, and my life is blessed to be able to know the family. You are all in my heart.
Rebecca Fountain
March 17, 2013
Showing 1 - 19 of 19 results